KOTA KINABALU: Several Sabah opposition leaders welcomed the RM3.1mil Covid-19 aid allocation for opposition assemblymen in Sabah, but hopes that it would be expanded for other uses.

United Progressive Kinabalu Organisation (Upko) president Datuk Seri Madius Tangau said the announcement by Chief Minister Datuk Seri Hajiji Noor that all 31 state assemblymen would each get an allocation of RM100,000 as Covid-19 aid is a good start towards depoliticisation of the constituency development fund (CDF).

The Tuaran MP said this shows that Hajiji is starting to reform a flawed practice under the previous governments but feels that the reform can be expanded.

“Hajiji will be remembered in history if his government can enact a legislation that ensures equitable CDF for all assemblymen and Members of Parliament (MPs) regardless of their party affiliation, ” he said.

Madius said the Gabungan Rakyat Sabah (GRS) government should be more reformist than its predecessors.

The Sabah government also gives MPs RM10,000 per month to maintain their service centres, but the money is channelled to the Bersatu division chairperson for the 14 opposition-held constituencies in Sabah and Labuan.

Madius said the RM10,000 should be given to the MP office elected by the people, regardless of party she or he represents.

“Giving RM1.68mil to the 13 division chairpersons of the state government’s anchor party should be stopped.

“Upko will advocate for this reform both at state and federal levels not only under the present government but also any political coalition seeking a mandate from the people to form the government, ” he said.

Kota Kinabalu MP Chan Foong Hin of DAP said though this is a positive development, it is still not enough.

“I acknowledge this little achievement by the GRS government but bear in mind that Pakatan Harapan at national level was the first to introduce constituency allocation to opposition MPs since 2018, ” he said.

“Before that, the Pakatan government in Penang and Selangor already had these opposition allocations a few years back. It’s nothing new but I will give credit where it is due, ” he said.

Chan said the long term goal should be to seek equal allocation among the elected representatives, be it at national or state levels as ruling parties should not penalise the rakyat for not voting for someone who is not aligned with them.

Likewise, Api-Api assemblywoman Datuk Christina Liew, who is also Sabah PKR chief, expressed her gratitude to Hajiji for the special allocation of RM100,000 to help the people in their respective constituencies impacted by the pandemic.

In thanking Hajiji for his consideration and open-mindedness, she said she hoped that he would consider topping up the sum once they have exhausted the funds in serving their constituents.

She also reiterated her call for Hajiji to provide each opposition assemblyman with the same development funds as their government counterparts, as what the Perak and Johor state governments have done.

This move, she said, will enable the elected representatives to assist the government in the socio-economic development of the individual constituencies.

The 31 assemblymen are from the Warisan Plus front which includes Warisan, Upko, DAP and PKR.

There are 79 assemblymen, including six who were nominated, in the Sabah state assembly. 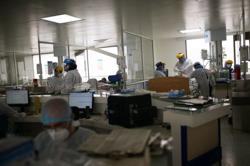