PETALING JAYA: Covid-19 cases in Selangor continue to rise as it recorded 3,285 infections out of the overall new high of 5,728 cases nationwide.

The state now holds the record with the most number of cases with 65,474 infections.

Yesterday was also the second time infections in the state breached the 3,000 mark, the first being on Friday with 3,126 cases.

Health director-general Tan Sri Dr Noor Hisham Abdullah said about 75% of the cases in Selangor came from existing clusters and close contact screening on the field.

“There were 792 cases in Johor, making it the second highest for number of new cases, followed by Kuala Lumpur with 480 cases, ” he said in a statement.

Three of the victims were men aged between 53 and 78 with a history of non-communicable diseases such as diabetes and high blood pressure.

The other fatality was a 62-year-old woman suffering from breast cancer.

“There were also two deaths each in Sabah, Labuan and Perak and one each in Johor, Sarawak and Melaka, ” he said.

Only one of the 13 was a non-citizen.

The new cases recorded pushed the total number of infections nationwide to 209,661.

Dr Noor Hisham also said 319 patients were warded at intensive care units with 120 of them on ventilators.

Four existing clusters have ended but 16 new ones have been detected.

A total of 13 are linked to workplaces while three were community clusters.

There are currently 387 active clusters in the country. 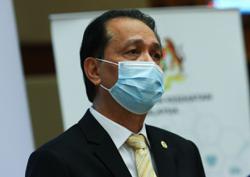