PETALING JAYA: Another high of 5,728 Covid-19 cases has been recorded, bringing the total number of infections nationwide to 209,661.

The Health Ministry also said Selangor had the most new cases, with 3,285 recorded.

Health director-general Tan Sri Dr Noor Hisham Abdullah said on Saturday (Jan 30) that there were another 13 fatalities, bringing the death toll to 746.

Of the 13 fatalities, four were recorded in Selangor involving three men aged from 53 to 78 and a 62-year-old woman.

The men had had histories of non-communicable diseases such as diabetes and high blood pressure while the woman also had breast cancer.

"There were two Covid-19 deaths each in Sabah, Labuan and Perak and one each in Johor, Sarawak and Melaka," he said, adding that only one death was of a non-citizen.

Dr Noor Hisham also announced the end of four clusters and the emergence of another 16,13 of which are linked to workplaces and three community clusters.

There are currently 387 active clusters nationwide.

Earlier on Saturday, Selangor Mentri Besar Datuk Seri Amirudin Shari said that the sharp increase in the state's cases was due to a backlog of cases over the past 10 days.

He said the state would be taking steps to handle the pandemic better, including imposing compounds on private clinics or hospitals that do not report positive cases directly on the same day through the Public Health Laboratory Information System (Simka).

The state will also be implementing the "Preventing Outbreak at Ignition Site (POIS)" programme in factories state-wide, as these have been identified as the cause of widespread Covid-19 transmission.

In a statement, Amiruddin said the state government was also planning to increase the number of Covid-19 Assessment Centres (CAC) especially in the Petaling, Hulu Langat and Gombak districts.

These centres will assess Covid-19 patients and classify them according to certain categories before they are taken to quarantine centres or hospitals for further treatment.

Additionally, Amirudin said the Quarantine and Low-Risk Treatment Centre (PKRC) at the Malaysia Agro Exposition Park (MAEPS) would be able to accommodate an additional 6,000 patients with the provision of more facilities, including intensive care unit (ICU) tents and medical equipment. 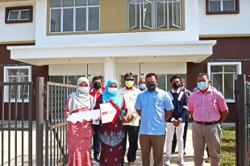