He said it would empower community leaders to coordinate and monitor the activities at their respective longhouses and villages to ensure compliance with the SOPs.

"They will also help to raise awareness about the dangers of Covid-19 and issue warnings or implement restrictions based on existing laws," he said at the state disaster management committee's briefing here Friday (Jan 29).

Uggah also said the SOPs for funerals had been further tightened, with only immediate family members allowed to attend.

They must also inform the district office and police of the funeral for crowd control purposes.

Previously, the committee had decided that only a maximum of 30 people were allowed to attend funerals during the movement control order and conditional MCO period, while not more than 20 people are allowed at the burial site.

Sibu division is under MCO and the rest of Sarawak under conditional MCO until Feb 14.

In addition, Uggah reiterated that all social activities and gatherings were not allowed during the MCO and conditional MCO period.

"We are doing this because many of the recent cases in Sarawak are linked to social activities," he said.

This brings the state's tally of confirmed cases to 4,124 and total fatalities to 36. 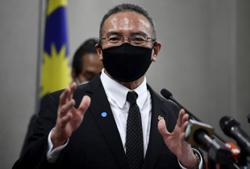