Lam, known for heading the medical team that discovered the Nipah virus, noted the country was doing “far too few genome sequencing on Covid-19 samples” and may have missed cases caused by the variants.

“There must be more cases in the community accounting for such a large surge since it is known that the UK and other variants have high transmissibility, up to 70% more than the normal strain, ” he said in a statement on Friday (Jan 29).

In December last year, the United Kingdom confirmed a new highly infectious strain, known as the B117 strain, was detected there.

Malaysia, on Jan 11, detected the variant from a traveler with a travel history to UK.

However, Health director-general Tan Sri Dr Noor Hisham Abdullah clarified there were no outbreaks linked to that variant as the patient had been isolated.

Besides the UK, other known highly infectious variants include the South Africa variant and the Brazil variant that have been found in those countries.

Lam, who is a Universiti Malaya Research consultant, said the Brazil variant was more worrisome as it has “more than a dozen alterations”, several of which are found on the virus’ spike protein.

“Because of this, we suspect it will be more transmissible. There is also some early evidence that neutralising antibodies from the first infection might not recognise the P.1 variant (Brazil), which could lead to reinfection, and even vaccine failure. We must keep a close watch over this, ” Lam said.

Lam added that the recent variants from the UK, South Africa and Brazil, besides being more transmissible, have sparked concerns that vaccines may be less effective against them.

However, he said there is no strong evidence yet that the present vaccines would not work.

“But, scientists have raised the possibility that this variant can evade antibodies, which would impact the current vaccines’ effectiveness.

“Malaysia must do more to monitor for variants entering the country since this has an impact on epidemiology. Variants can affect diagnostics, therapeutics and vaccines, and even the mode of spread.

“It is important for Malaysia to monitor for virus variants and contribute our findings to the global genome sequence database, ” he said.

Lam, who is also a senior fellow at the Academy of Sciences Malaysia, said Malaysia had only contributed 300 genome sequences to the GISAID international database compared to Thailand that had contributed nearly 4,000 genomes.

GISAID, is an initiative that promotes the rapid sharing of data from all influenza viruses.

“We should and can do more. If the Health Ministry is not able to undertake this because of workload, the academic and private laboratories can help out, ” he said.

Lam added that the appearance of a more transmissible and potentially more deadly variants is a warning that Malaysia should limit travel during the pandemic as much as possible, as well as tighten its borders.

“Fortunately, the mitigation measures implemented in Malaysia, namely the wearing of face masks, washing of hands, maintaining physical distancing, and others are still effective even with these more transmissible variants. The current vaccines seem to offer protection, but we must remain vigilant for future mutations, ” he said. 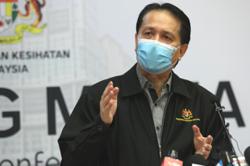