PETALING JAYA: Malaysia is currently in the 29th spot in the list of countries with the highest number of Covid-19 infections in a two-week period as at Jan 25, according to data from the US-based Johns Hopkins University.

Among Asean countries, Malaysia is second after Indonesia with 48,625 cases and a four-digit hike in daily cases in the two-week period under review.

Malaysia also recorded the second highest cumulative Covid-19 cases per one million population in Asean – 5,773 – but is behind Singapore with 10,145 cases.

Malaysia, along with 110 other countries, has never recorded a single day without a Covid-19 case. 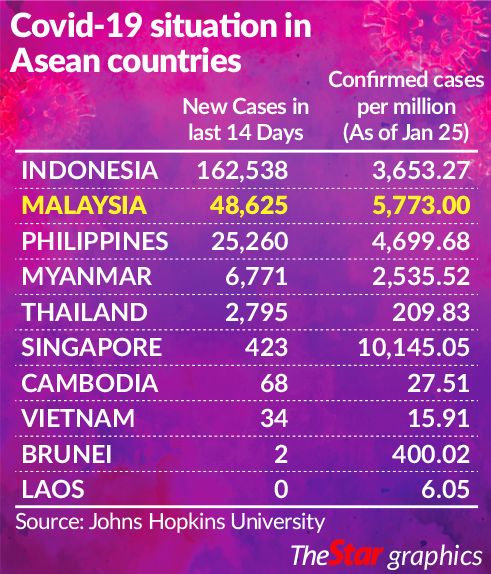 According to data from the New England Complex Systems Institute (NECSI), 83 countries including Malaysia are facing an exponential rise in Covid-19 cases, requiring “serious action” to break the chain of infection, it said.

Health experts said the surge in cases could have been caused by the new Covid-19 strain but other factors such as the level of restriction and public compliance also play a part.

“Countries have different resources and the approach is different depending on the resources. Mentalities are different too.

“Taiwan and Hong Kong made rigorous use of technology in contact tracing.

“The trade-off was data privacy but the population accepted it so it was successful, ” he said.

Australia, New Zealand and Brunei went for virus suppression through lockdowns, he said, by closing borders and being strict about quarantines.

“The United States and United Kingdom took too long to make decisions, so community transmission became widespread, ” he said.

Malaysian Medical Association president Datuk Dr Subramaniam Muniandy said countries that were quicker to respond to the pandemic are the ones successful in containing the spread of Covid-19.

“Vietnam, which neighbours China, controlled its borders from the very beginning and went above and beyond World Health Organisation (WHO) recommendations in managing the pandemic.

“New Zealand also restricted travel early. The measures played an important role in its first line of defence against Covid-19, ” he said, adding that speed is everything when battling a pandemic.

He also said that beyond rapid early detection, isolation, contact tracing, protecting the most vulnerable and treating the infected, New Zealand also conducted voluntary testing to check if transmissions were still present in the community.

Data from the NECSI showed that a total of 28 countries are seeing reduced numbers, while 27 are in the green zone, with no or minimal cases on a seven-day average.

The Holy See, Vanuatu, Marshall Islands, Solomon Islands and Samoa are among six countries which have had no cases in the 14-day period under review.

New Zealand, Brunei and Vietnam also recorded a minimal increase in cases within the same duration.

NSC to consider many factors before deciding on CMCO