Cops: Comply with SOP during event

KUALA LUMPUR: Police will monitor the Thaipusam chariot journey to and from Batu Caves to ensure standard operating procedure (SOP) compliance, says the Inspector-General of Police.

Tan Sri Abdul Hamid Bador said the government’s decision to allow the chariot to journey from the Sri Maha Mariamman Temple in Jalan Tun HS Lee to the Sri Subramaniam Temple in Batu Caves did not include a public procession or gatherings along the designated route. “The chariot will be allowed to move to Batu Caves on Jan 27 between 3am and 6am and will return to Kuala Lumpur on Jan 29, ” he said in a statement yesterday.

Reminding that those permitted to be involved must strictly follow the SOP, he said: “Only 10 people are allowed to escort the chariot, comprising five temple committee members and five personnel.”

“The chariot will not be allowed to make stops along its route and no drumming or playing of any musical instruments will be allowed.

“No stalls will be allowed to open along the route except for those that have permits from the local authorities, ” he said.

The IGP also advised the public to comply with the SOP to avoid any trouble or legal action.

In a tweet on Saturday, Federal Territories Minister Tan Sri Annuar Musa said approval had also been given for the chariot to return on Jan 29, a day after Thaipusam.

The Sri Maha Mariamman Temple management committee had proposed the chariot continue with its customary journey but without the usual procession and for a non-stop journey back after the celebration.

Those wanting to watch the Thaipusam chariot trip can do it from the comfort of their own homes as it will be shown live on the We Love Batu Caves Facebook page and its YouTube channel on Thursday.

Procession can go on under strict conditions 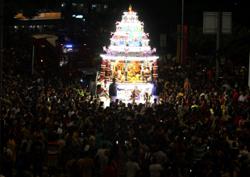