GEORGE TOWN: The work goes on for char koay teow seller Tan Chooi Hong, 79, despite being described by the BBC as Malaysia’s humble ‘King of Noodles’.

Even the movement control order has not stopped him from enjoying steady business at his stall on Siam Road. “My father has been doing this for more than 60 years. It is a family business which he inherited from his father, ” said his daughter Evelyn Tan, who helps him out at the stall.

Chooi Hong was featured in the newly released BBC Travel’s “50 Reasons to Love the World in 2021”.

The write-up referred to him as “one of the oldest char kway teow legends in Malaysia.”

Tan said her father has no intention of slowing down, health permitting, adding that they were lucky to enjoy good business despite the MCO.

Local foodies continue to order takeaway from him.

These days, she said the queue was not so long as there were no visitors from other states due to the travel restrictions.

Drinks seller Tio Kok Chuan, 57, said before the MCO, customers had to wait between one and two hours to get their meal.

He said Chooi Hong used to cook from a pushcart prior to him moving to the stall.

“He will cook for two hours, starting at noon, before passing the task to his son, who will continue to whip up the dish till 6pm, ” said Tio.

Management executive Ooi Eng Hock, 38, said the MCO did not stop him from visiting the stall to get his char koay teow fix.

“I have been coming here faithfully for the past four years, at least a few times a month.

He said he enjoyed Chooi Hong’s cooking and that he could not get a similar taste elsewhere.

His skill had been perfected over the years, Ooi said.

“He cooks it over a wood-fired wok and the smoky smooth appeal is the reason for the long lines.”

The BBC write-up also noted that chef Martin Yan, known for his TV show named Yan Can Cook, visited the stall in 2015. 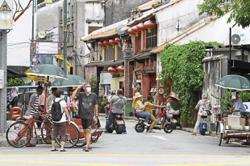