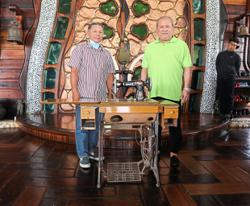 MERSING: An old sewing machine that almost went into a dumpster will now be on display at the Mersing Museum here thanks to Johor Ruler Sultan Ibrahim Ibni Almarhum Sultan Iskandar.

His Majesty made a decree for the antique sewing machine to be displayed at the museum after spending some time observing the item, which is believed to be more than 40-years-old.

Sultan Ibrahim - who is an avid antique collector and has a variety of collections - added that as the sewing machine's owner said it was no longer usable and as an antique, it would be kept at the museum.

His Majesty decreed that the antique should be on display at the museum for public viewing.

“I appreciated the owner’s eagerness to show me the antique sewing machine, ” His Majesty said in a statement that was posted on Sultan Ibrahim’s official Facebook page here Sunday (Jan 24).

The sewing machine's owner Choo Ming Hooi, 62, presented the antique to His Majesty at Istana Flintstones here on Saturday (Jan 23).

Choo, who lives in the district, said that the sewing machine belonged to his mother, who is now almost 90-years-old.

The Mersing Museum, which was officiated by Sultan Ibrahim in May, 2016, displays various artifacts in its collection.