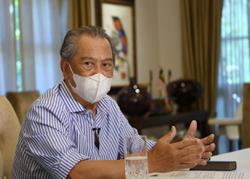 KUALA LUMPUR: The government has filed an application to strike out a lawsuit filed by a lawyer challenging the decision by Yang di-Pertuan Agong Al-Sultan Abdullah Ri'ayatuddin Al-Mustafa Billah Shah to not declare a state of emergency in the country, despite the Prime Minister's advice.

The government's application was filed by a federal counsel at the Kuala Lumpur High Court here on Thursday (Jan 21).

In the court document, the government stated that the lawsuit by plaintiff Syed Iskandar Syed Jaafar was disgraceful, vexatious, frivolous and an abuse of court process.

Syed Iskandar had filed an originating summons on Oct 30, last year, wanting the court to answer two legal questions of constitutional and public importance, including whether the Yang di-Pertuan Agong has "unfettered discretion" not to declare an Emergency despite advice of the Prime Minister or the Cabinet.

In the supporting affidavit for the government's striking-out application, the government stated that Syed Iskandar had failed to specify public or personal interest of his that was contravened or personal damages that he suffered due to the King's refusal to declare an emergency.

The affidavit, which was signed by Solicitor General Datuk Abdul Razak Musa, also said that Syed Iskandar failed to specify his legal interests in the matter, issues between him and the defendant (government), as well as his constitutional right of his that was denied.

Razak also contended that the determination by the court on the issues raised in Syed Iskandar's lawsuit was an academic exercise which would make a hearing on the matter a waste of the court's time.

“The determination of these questions will not bring any effect to the decision (of the King not to accede to Muhyiddin’s initial request for an emergency), ” Razak said.

On Oct 25 last year, the King decided not to accede to Prime Minister Tan Sri Muhyiddin Yassin's request for the proclamation of emergency.

However, on Jan 12 this year, the King agreed to Muhyiddin's advice for a proclamation of emergency nationwide until Aug 1 to contain further spread of the Covid-19 pandemic.