The collapsed road at Kinabalu Park.

KOTA KINABALU: Landslides and collapsed roads continue to occur despite the easing of heavy rains in some parts of Sabah following a week of downpour and floods.

The latest reports of such incidents are in Kinabalu Park on the foothills of Mount Kinabalu and Paitan but no casualties were reported as yet.

The Kinabalu Park road collapsed at about 8am Wednesday (Jan 20) including a parking zone along the road stretch.

According to the Fire and Rescue Department, the damage is estimated at about 100m in depth.

The remaining lane is still passable but for those who do not wish to use this road, they can choose the alternative Bundu Tuhan - Kinasaraban road to Ranau or Kota Kinabalu, among other districts.

The condition of the embankment is getting worse and another two metres of the area is expected to be affected. 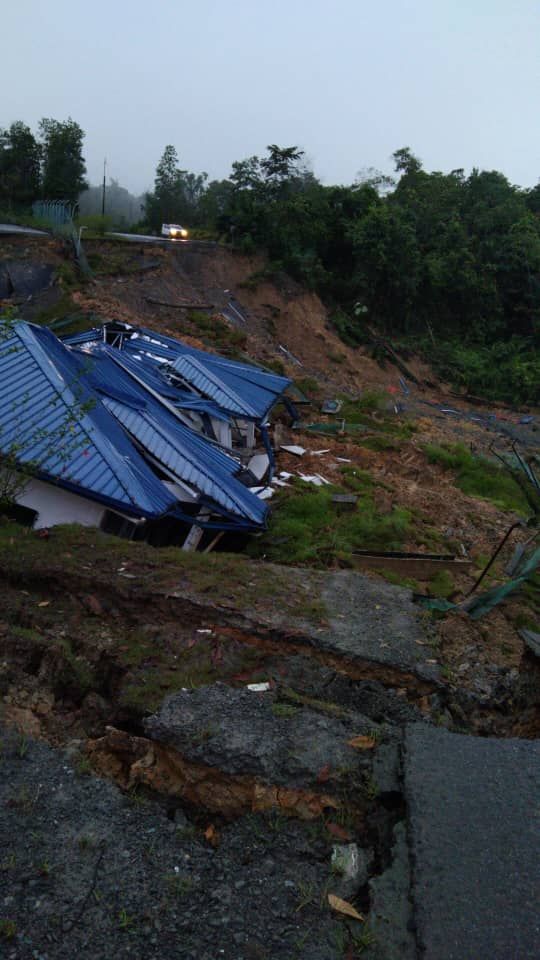 Temporary sign boards and barricades have been put up to warn road users of the danger.

In Paitan, a house was damaged following a landslide near the Paitan water treatment plant area on Tuesday (Jan 19) night.

The road - Jalan Nangoh Paitan Kanibungan is totally inaccessible for the time being.

People can still use the old KK road as an alternative.

Seven other areas including those in Kudat, Pitas, Kota Marudu and Kota Kinabalu experienced landslides while over 40 roads are still affected by floods as of 8am, Wednesday.