IPOH: A thorough investigation will be carried out on the alleged environmental damage around the Tanjung Batu waterfall in Segari, Manjung, says Perak Mentri Besar, Datuk Saarani Mohamad.

In a statement Monday (Jan 18), Saarani said the state government has instructed both the Forestry and Environment Departments to look into the matter.

He said Mentri Besar Incorporated (MB Inc) has also been asked to provide a detailed report on quarrying activities in the vicinity, which has been accused of causing the pollution.

“The state government has ordered all work at the area to stop, while waiting for the investigations to be completed, ” he added.

On Jan 16, environmental activist group Aktivis Sahabat Alam (Kuasa) reported that the once-pristine waterfall was now filled with debris from soil erosion, which it claimed was due to quarrying.

Kuasa vice-chairman Noor Ismady Ahmad Radzuan said he came across the site on Jan 14 when surveying some locations near the area for a mangrove tree-planting programme.

He had said that the waterfall was still intact when he was there early last December, and that it was disappointing to see the waterfall, one of the biggest in the area, now in a deplorable condition. 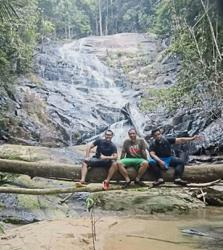