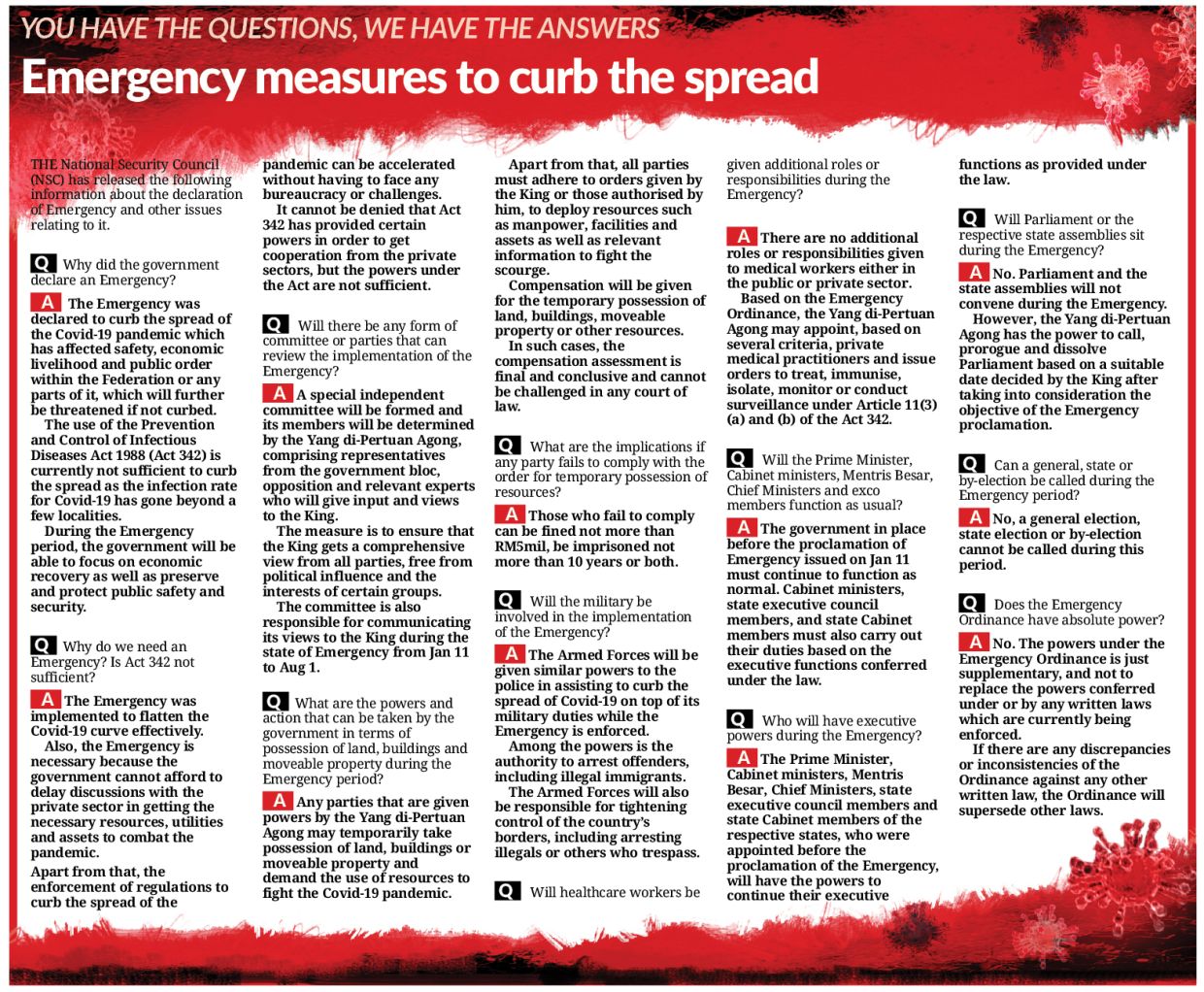 THE National Security Council (NSC) has released the following information about the declaration of Emergency and other issues relating to it.

Q: Why did the government declare an Emergency?

A: The Emergency was declared to curb the spread of the Covid-19 pandemic which has affected safety, economic livelihood and public order within the Federation or any parts of it, which will further be threatened if not curbed.

The use of the Prevention and Control of Infectious Diseases Act 1988 (Act 342) is currently not sufficient to curb the spread as the infection rate for Covid-19 has gone beyond a few localities.

During the Emergency period, the government will be able to focus on economic recovery as well as preserve and protect public safety and security.

Q: Why do we need an Emergency? Is Act 342 not sufficient?

A: The Emergency was implemented to flatten the Covid-19 curve effectively.

Also, the Emergency is necessary because the government cannot afford to delay discussions with the private sector in getting the necessary resources, utilities and assets to combat the pandemic.

Apart from that, the enforcement of regulations to curb the spread of the pandemic can be accelerated without having to face any bureaucracy or challenges.

It cannot be denied that Act 342 has provided certain powers in order to get cooperation from the private sectors, but the powers under the Act are not sufficient.

Q: Will there be any committee or party that can review the implementation of the Emergency?

A: A special independent committee will be formed and its members will be determined by the Yang di-Pertuan Agong, comprising representatives from the government bloc, opposition and relevant experts who will give input and views to the King.

The measure is to ensure that the King gets a comprehensive view from all parties, free from political influence and the interests of certain groups.

The committee is also responsible for communicating its views to the King during the state of Emergency from Jan 11 to Aug 1.

Q: What are the powers and action that can be taken by the government in terms of possession of land, buildings and moveable property during the Emergency period?

A: Any party that is given powers by the Yang di-Pertuan Agong may temporarily take possession of land, buildings or moveable property and demand the use of resources to fight the Covid-19 pandemic.

Apart from that, orders given by the King or those authorised by him to deploy resources such as manpower, facilities and assets as well as relevant information to fight the scourge must be obeyed.

Compensation will be given for the temporary possession of land, buildings, moveable property or other resources.

In such cases, the compensation assessment is final and conclusive and cannot be challenged in any court of law.

Q: What are the implications if any party fails to comply with the order for temporary possession of resources?

Q Will the military be involved in the implementation of the Emergency?

A: The Armed Forces will be given similar powers to the police in assisting to curb the spread of Covid-19 on top of its military duties while the Emergency is enforced.

Among the powers is the authority to arrest offenders, including illegal immigrants.

The Armed Forces will also be responsible for tightening control of the country’s borders, including arresting illegals or others who trespass.

Q: Will healthcare workers be given additional roles or responsibilities during the Emergency?

A: There are no additional roles or responsibilities given to medical workers either in the public or private sector.

Based on the Emergency Ordinance, the Yang di-Pertuan Agong may appoint, based on several criteria, private medical practitioners and issue orders to treat, immunise, isolate, monitor or conduct surveillance under Article 11(3)(a) and (b) of the Act 342.

A: The government in place before the proclamation of Emergency issued on Jan 11 must continue to function as normal. Cabinet ministers, state executive council members, and state Cabinet members must also carry out their duties based on the executive functions conferred under the law.

Q: Who will have executive powers during the Emergency?

A: The Prime Minister, Cabinet ministers, mentris besar, chief ministers, state executive council members and state Cabinet members of the respective states, who were appointed before the proclamation of the Emergency, will have the powers to continue their executive functions as provided under the law.

Q: Will Parliament or the respective state assemblies sit during the Emergency?

A: No. Parliament and the state assemblies will not convene during the Emergency.

However, the Yang di-Pertuan Agong has the power to call, prorogue and dissolve Parliament based on a suitable date decided by the King after taking into consideration the objective of the Emergency proclamation.

Q: Can a general, state or by-election be called during the Emergency period?

A: No, a general election, state election or by-election cannot be called during this period.

Q: Does the Emergency Ordinance have absolute power?

A: No. The powers under the Emergency Ordinance are just supplementary, and not to replace the powers conferred under or by any written laws which are currently being enforced.

If there are any discrepancies or inconsistencies of the Ordinance against any other written law, the Ordinance will supersede other laws.