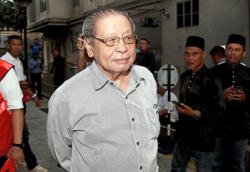 PETALING JAYA: As questions remain on whether the Opposition could put a united front to take on Perikatan Nasional, Tun Dr Mahathir Mohamad has claimed that it was DAP and its secretary-general Lim Guan Eng who preferred Datuk Seri Mohd Shafie Apdal as candidate for premier.

"Well, that is the feeling of Guan Eng and DAP," he said during BFM's " Breakfast Grille" programme on Friday (Jan 15).

He was asked why he thinks Shafie is a better candidate for prime minister than Opposition leader Datuk Seri Anwar Ibrahim.

"Anwar does not want me to be there at all. But, if I'm not there, the Malays will not support Pakatan and he will not be able to continue as prime minister," added Dr Mahathir.

He said he has no problems with Anwar being the prime minister, but he has to also garner the support of Malays.

Last June, Dr Mahathir had also claimed that it was Lim who proposed Shafie as candidate for prime minister, after a meeting with DAP and Parti Amanah Negara top leaders.

During then, senior DAP and Amanah leaders, in acting as mediators between Anwar and Dr Mahathir, had also proposed for Pakatan Harapan's top leadership to discuss the proposal of making Shafie prime minister candidate for the Opposition.

However, it was met with fierce rebuke from PKR, whose leader strongly declared that no one other than Anwar should be prime minister if the Opposition manages to recapture Putrajaya.

At the same time, during the interview, Dr Mahathir also stressed that it is up to Parliament to decide whether Anwar possesses an adequate majority to form the next government and be prime minister.

"I cannot determine that. You have to get the support of the majority of MPs."

"Only Parliament can decide. Even if DAP appoints him as prime minister and if he goes to Parliament and Parliament rejects him, he cannot be the government."

Dr Mahathir also stressed that a minority government will never function in Malaysia because laws will not possess the adequate majority to be passed in Parliament.

At the same time, Dr Mahathir said corruption wasn't endemic during his tenure as prime minister, but stressed that he doesn't care about his legacy at all.

"I don't care about my legacy. I'm quite sure that when I'm dead and gone, people will run me down and all that.

"It's not important. I will be dead anyways. What legacy?"