Foreign syndicates are known to smuggle rice, bought cheaply in countries such as Thailand and Vietnam, through lorong tikus (illegal routes) at the Malaysian border, where it is sold at the standard price of RM2.60 per kg or higher.According to rice industry coalition Padi Rescue chief coordinator Nurfitri Amir Muhammad, the tactic used by the smugglers reaped them huge profits.

It was reported recently that rice smuggled from Thailand was being sold at RM48 for a 10kg pack, which is RM16 higher than the usual price.

Nurfitri Amir has received information from sources that the syndicates have grown bold enough to use approved permits (APs) to smuggle rice into Malaysia through shipping containers.

“My sources claimed that with just one AP, the syndicates can bring in excess goods and that this is happening at our ports and borders, ” he said in an interview.

He wondered how the syndicates disposed of the contraband rice “dumped” on the Malaysian market considering that rice stock is usually sold to wholesalers and retailers such as supermarket chains and sundry shops.

The issue of rice smuggling is not new and has received wide media coverage over the years.

The authorities have swooped in on smugglers whose modus operandi was exposed in the media but despite enforcement activities, smuggled rice is still being sold openly in the market.

While National Council of Professors member Prof Dr Mohd Fauzi Mohd Jani described the government’s intention to raise Malaysia’s rice self-sufficiency level to 75% as proactive, he said the nation’s dependence on rice imports, as well as rampant rice smuggling, would continue to affect the income of padi farmers.“Cunning rice smuggling rings are selling rice to small sundry shops and night market traders at prices that are lower than that of locally produced rice, ” he said.

He suggested that the ministry set up a steering committee comprising industry players such as the Farmers Organisation Authority and padi farmers’ associations to address the issue.

“The proposed steering committee can also coordinate their (padi farmers’) needs for which RM1.7bil has been allocated under Budget 2021, ” he said.

He added that Bernas, which has a monopoly on rice supply in Malaysia, and its network of companies should increase the number of granaries to store rice to ensure adequate supplies for up to three to six months.

“This is important in view of the Covid-19 pandemic, ” he said. — Bernama 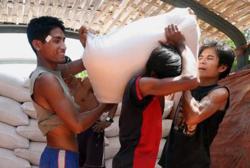