SEREMBAN: A retired teacher here has been cheated of RM1.82mil in a Macau scam.

State Commercial Crime Investigation Department chief Supt Aibee Ab Ghani said the 66-year-old victim had received a call from a man claiming to be "Sgt Albert Lai" on Oct 28, and was accused of being involved in cheating and money-laundering activities.

The man also claimed that he was from the Pahang police contingent.

"Three days later, she received another call from a man claiming to be ‘Insp Yong’ from Bukit Aman who asked for details of her savings accounts.

"She was then told to withdraw savings from her fixed deposit accounts to allow the authorities to probe her," he said, adding that the victim was told not to tell anyone about the case.

She was also asked to hand over her ATM card, which was collected from her home by a male suspect.

Supt Aibee said the victim, who is from Port Dickson, did as was told and transferred her savings into several bank accounts.

From Nov 6 to Nov 26, the victim made 103 transactions to transfer money into accounts belonging to eight individuals.

Another RM80,000 was withdrawn from her savings account with her ATM card.

Supt Aibee said after she finished transferring the cash, she became worried and told one of her children about it.

She was then told that she had been scammed and a report was lodged on Wednesday (Dec 23). 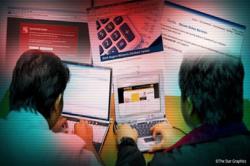