Ku Nan gets jail and fine for graft

The High Court judge found the former minister guilty of receiving RM2mil for himself from a property developer and sentenced him to 12 months in jail along with a RM2mil fine.

The subject of Tengku Adnan’s wealth was highlighted in Justice Zaini’s 87-page judgment.

“The accused maintained he is a man of means. I accept the accused’s contention that he did not intend to brag when declaring his worth and that he merely wanted to assert that RM2mil was not an amount that would entice him.

“RM2mil, in my view, is a substantial amount of money, even for a millionaire, ” he said yesterday. The Putrajaya MP, also popularly known as Ku Nan, had infamously said in his trial that “RM2mil is just like my pocket money”.

He was charged in his capacity as a public servant, namely Federal Territories Minister, with having received for himself a total of RM2mil from businessman Tan Sri Chai Kin Kong, who is Aset Kayamas Sdn Bhd (AKSB) director, via a Hong Leong Islamic Bank cheque belonging to the company which was deposited into a CIMB account owned by Tadmansori Holdings Sdn Bhd (THSB), which Tengku Adnan has an interest in, and is known to AKSB as being related to his official duties.

In his defence, Tengku Adnan said he raised the RM2mil as a political donation to fund the Sungai Besar and Kuala Kangsar by-elections, but this was shot down by the court.

Justice Zaini said he was unable to accept that the accused was entrusted to raise those funds as the two constituencies were not in his domain as the chairman of the Federal Territories Umno.

The money, he said, remained in Tengku Adnan’s Tadmansori account for his own benefit and there was no evidence to show the accused had withdrawn the money to pay for the by-elections’ expenses.

Calling this defence as an afterthought, Justice Zaini said

the accused had used the company as a “facade to receive the fruits of his crime”.

Both sheets, he said, were a simple one-page sheet itemising what they claimed to have used for the by-elections but the supporting receipts and documents to support the budget sheets were disposed of.

The judge said it was too convenient that the expenses said to be incurred in the sheets totalled up to just over RM2mil and therefore the court was disinclined to accept the testimonies of the two witnesses as well as their budget sheets.

After a maximum evaluation, Justice Zaini said the prosecution had proven its case against the accused.

“I therefore find the accused guilty and convict him on the charge against him, ” he added.

During a short break prior to sentencing, Tengku Adnan’s wife Datin Seri Anggraini Sentiyaki was seen visibly upset with the verdict.

Lawyer Datuk Tan Hock Chuan submitted that his client was a first-time offender and contributed significantly to the nation.

“He has served in the Cabinet and Parliament for a period of 17 years. The crime in this case is not a heinous one, ” he said.

Tan asked the court not to impose a custodial sentence but to give a fine of less than RM2,000 in order for his client to retain his position as the Putrajaya MP.

He said Tengku Adnan is on medication for hypertension and high cholesterol.

“We plead for justice to be tempered with mercy that there will be no custodial sentence, ” he added.

Deputy Public Prosecutor Julia Ibrahim, however, objected and said that the sentence sought by the defence was inappropriate in this case.

“In the accused’s own words, RM2mil is just pocket money to him. The sentence must be a deterrent so that other people would not repeat it.

“The court should not be giving a fine of less than RM2,000 in a case that involves RM2mil, which is just pocket money to the accused, ” she said.

DPP Julia said MPs “come and go” and for every general election or a by-election, there would be changes to the seats.

She proposed for a RM2mil fine and a custodial sentence, similar to what was handed over to former Selangor mentri besar Dr Mohamad Khir Toyo who was jailed for one year for corruption in 2011.

Justice Zaini said Tengku Adnan was not the first high-ranking public servant and politician to be convicted of a crime and the court was inclined to follow precedent in previous cases.

“There have been others. Everyone is equal before the law. I do not doubt that he has served the country for many years but the sentence must reflect the crime and be a deterrent to others, ” the judge said.

“The sentence is to run from the date of judgment, ” he said.

Tan asked for a stay of execution on both sentences and this was allowed by the court.

Tengku Adnan left the court complex with his family immediately and did not stop to speak to the press.

Tan told the press that the defence would file an appeal as soon as possible. 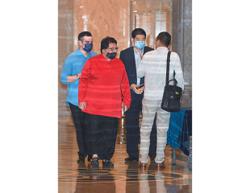