PUTRAJAYA: There are more Covid-19 recoveries than new cases in Malaysia on Thursday (Dec 17), as 1,297 patients were discharged, while 1,220 fresh infections were confirmed.

In a statement, Health director-general Tan Sri Dr Noor Hisham Abdullah said the country now has 89,133 confirmed cases since the start of the pandemic.

The number of people with active Covid-19 infections in Malaysia is now down slightly to 14,671.

Currently, 106 patients are in intensive care, with 53 requiring ventilator support.

Dr Noor Hisham said Selangor continued to record the highest increase of the day out of all states with 368 confirmed cases, or 30.2% of Thursday’s total.

On the three new deaths, Dr Noor Hisham said two were in Sabah and one in Johor.

The Johor cases involved a 36-year-old man who had a history of diabetes, high blood pressure and chronic kidney disease.

He passed away at Hospital Enche’ Besar Hajjah Khalsom in Kluang.

The other cases involved a 55-year-old Malaysian who died at the Queen Elizabeth Hospital in Kota Kinabalu and an 81-year-old foreign man, who was declared “dead-on-arrival” at the Duchess of Kent Hospital, Sandakan. 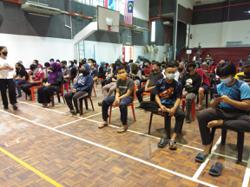