Photos, videos and geospatial evidence gathered by the Orang Asli of Kampung Ong Jangking and Sungai Papan show the extent of environmental damage caused by logging. Photo by Johari Aluej. 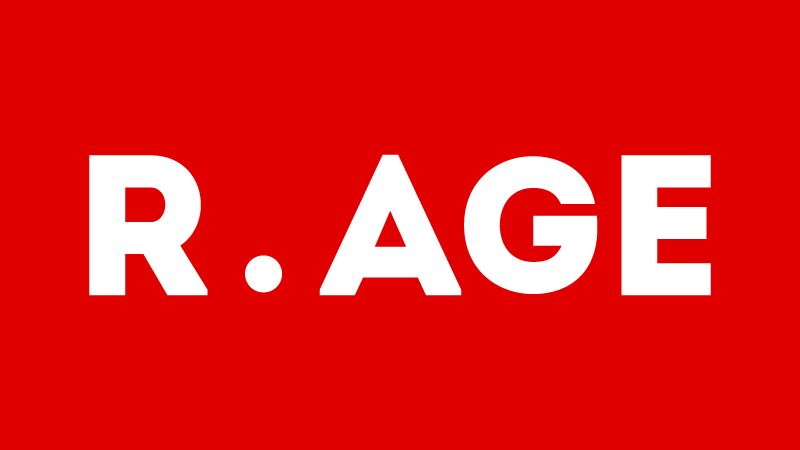 GERIK: Unregulated logging activity is destroying the rivers in an area near the Orang Asli settlements of Kampung Ong Jangking and Sungai Papan, according to evidence gathered by local Orang Asli citizen journalists.

Checks with the Perak Forestry Department show that the logging company involved is licensed, and its work has received the necessary approvals.

However, photographs, videos and geospatial evidence gathered by the Orang Asli there suggest that logging companies are flouting regulations.

“Looking at these photos, I think the (logging) road construction is not in accordance with guidelines, ” said Prof Mohd Hasmadi Ismail, when shown the evidence. “If guidelines are obeyed, there will still be degradation, but not as bad as this. This is at a critical level (of degradation).”

Prof Hasmadi lectures on forest extraction at Universiti Putra Malaysia, and has authored a number of research papers on the effects of logging roads in Peninsular Malaysia.

From the photos, he noticed instances where logging roads appear to be built too close to rivers, and where soil and debris that have not been disposed of adequately are contaminating rivers. He also remarked that the logging road appears to be in poor condition and could endanger the safety of workers. 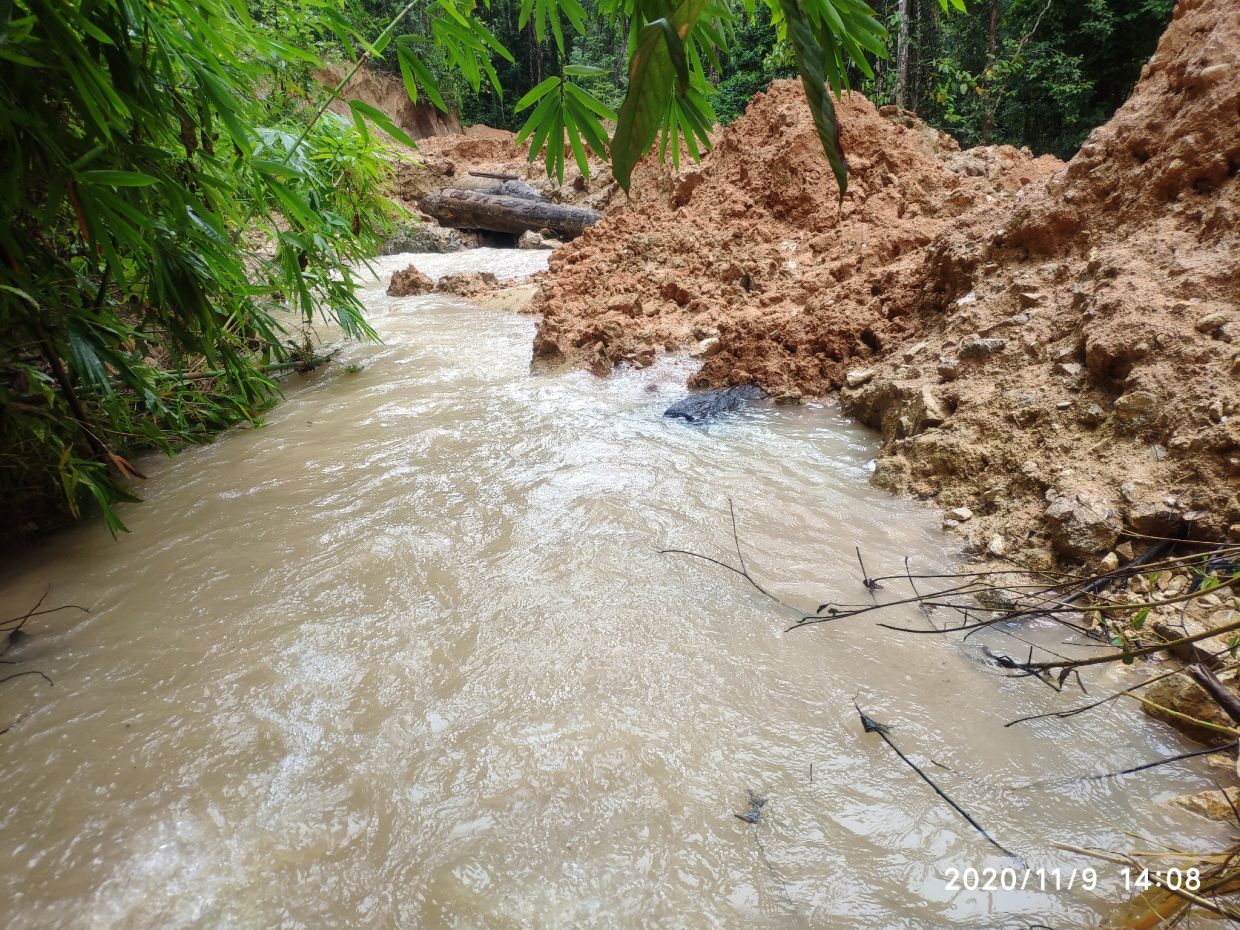 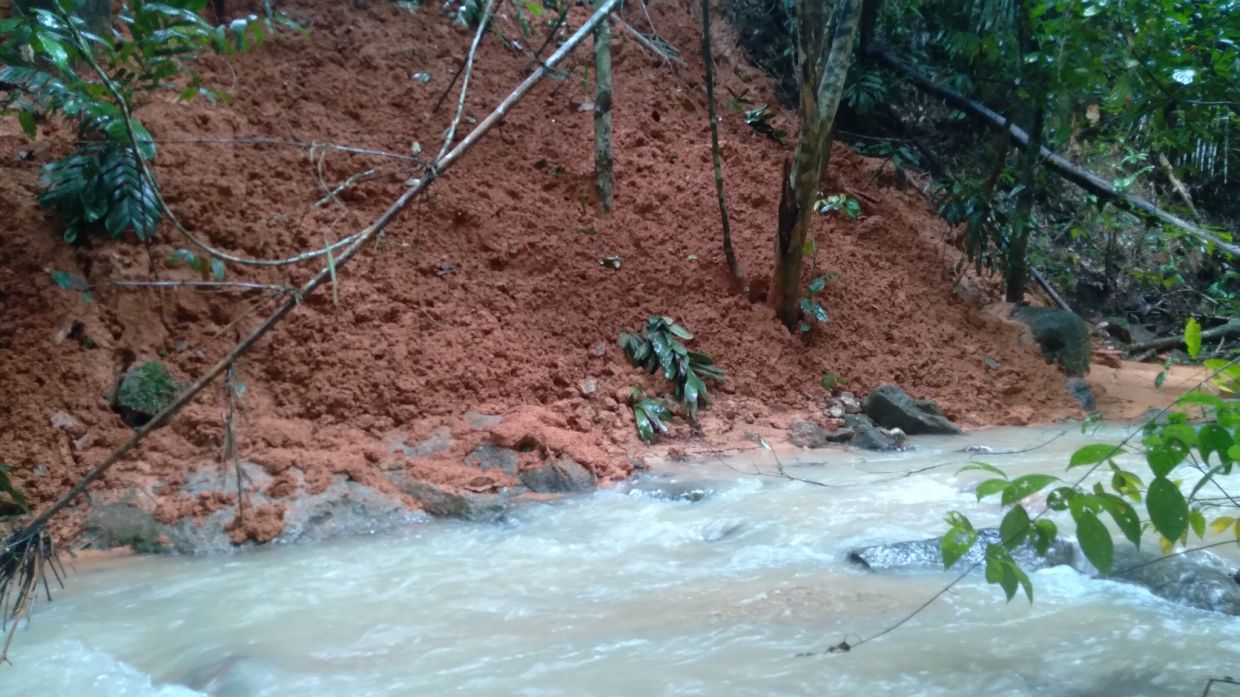 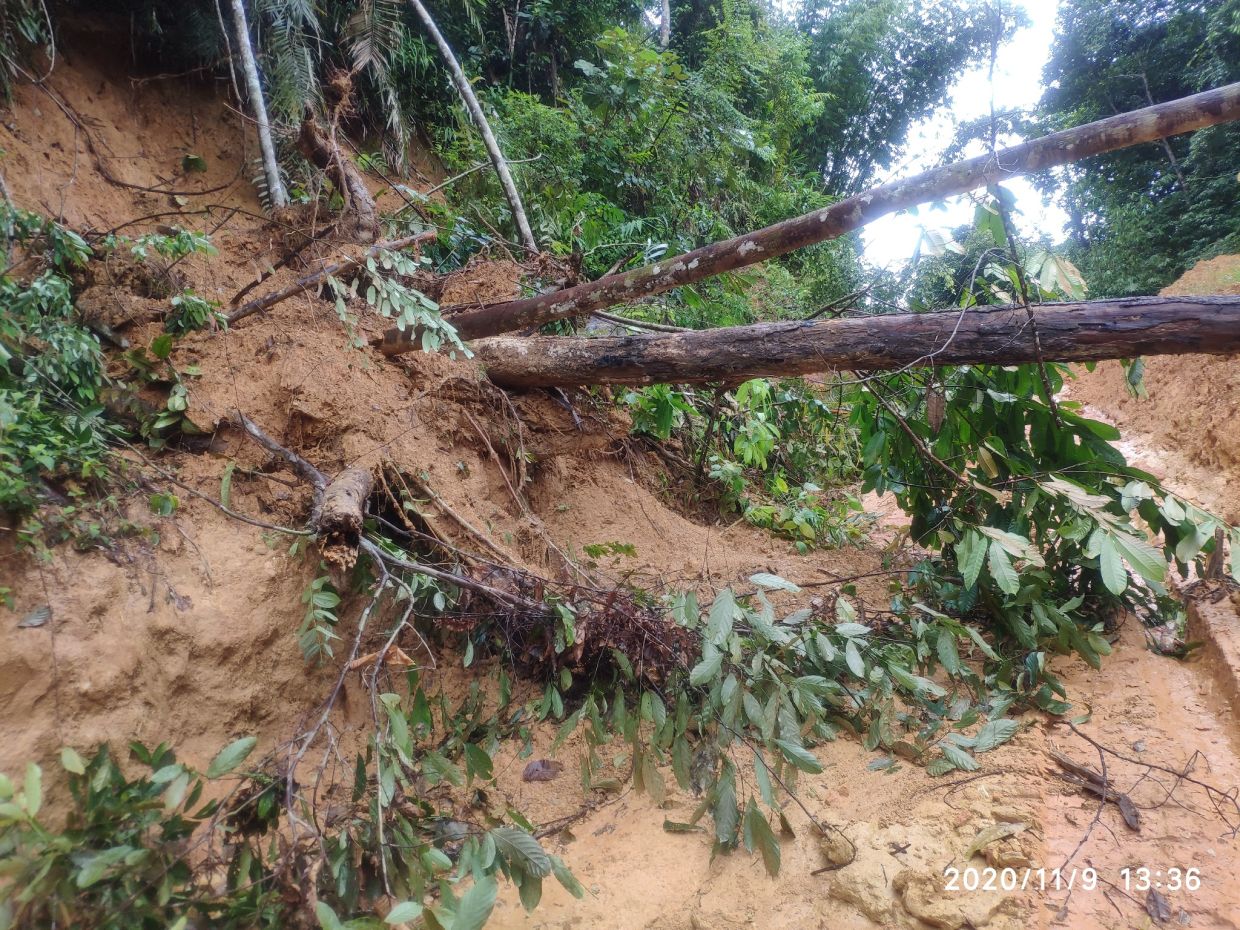 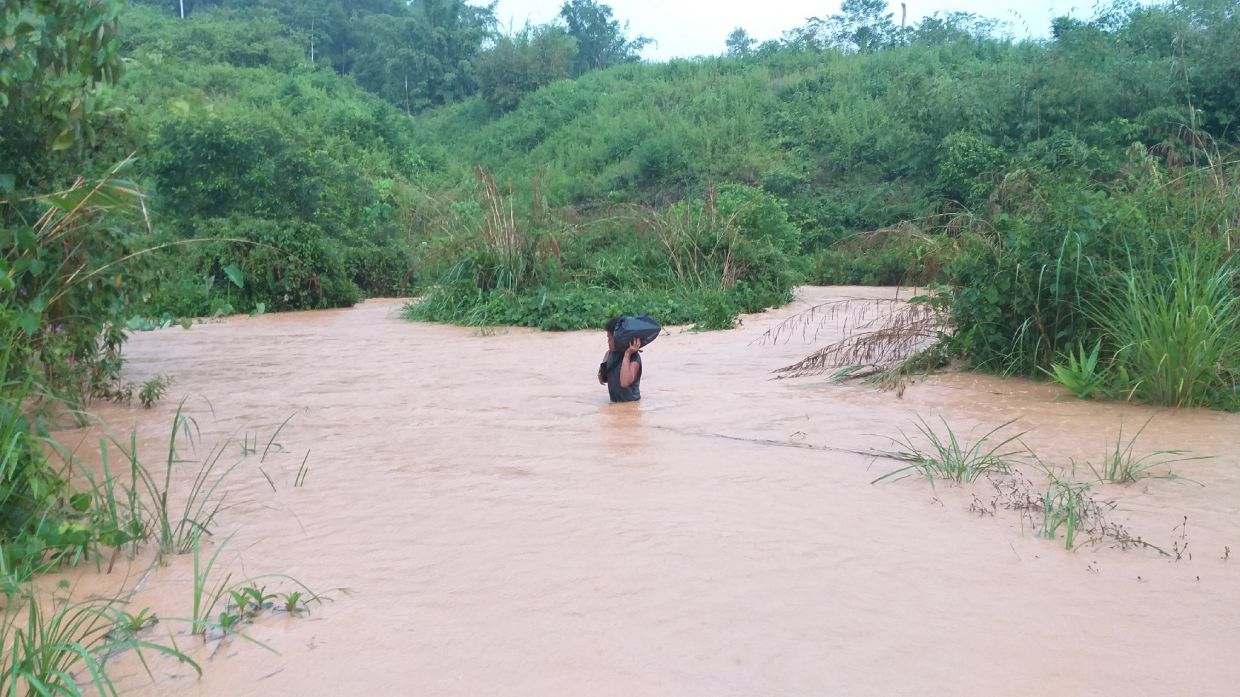 Photos taken by the Orang Asli of Kampung Ong Jangking reveal the environmental impact of logging activity on their landscape. See the interactive map above for more photos and videos. Photos by: Johari Aluej and Said Jali

According to Forestry Department guidelines, logging roads need to be built at least 10m from water bodies, including rivers. Bridges are required to allow unrestricted flow of the rivers they cross, with measures in place to minimise runoff flowing into the water. There are also guidelines that limit the inclines of slopes made in the course of road construction.

The director of the logging company was contacted multiple times and was shown some of the photos but declined to comment.

When shown the photos on Dec 1, the Perak Forestry Department asked for a week to investigate the allegations. It responded on Dec 8 saying its investigations confirmed a number of instances of non-compliance with regulations on logging roads and bridges, and the logging company would be issued a compound for each instance.

However, the Orang Asli claim that the logging has already had a detrimental impact on their environment, which affects their daily lives.

“The rivers are not right, and the forests are not healthy anymore, ” said Anjang Aluej, one of the community leaders of Kampung Ong Jangking.

“The Ong Laba river used to be a place we can fish, or hunt frogs and tortoises, but now the water is murky and muddy, and there are only small fish left.

“When it rains, the river overflows downstream and can be dangerous, as that is the place we usually cross when heading to town, ” he added.

Photos from the community show severe sedimentation on the Ong Laba river downstream from the logging activity. There are also photos of the river overflowing during rains, at the point where it runs closest to Kampung Ong Jangking.

Prof Hasmadi agrees that this could be the result of the unregulated logging upstream. “Sediment from upstream will be deposited downstream and make the river shallower. During heavy rains, the river’s water level will rise faster.”

Meor Razak, a representative of Sahabat Alam Malaysia – one of Malaysia’s oldest environmental civil society organisations – says that such outcomes are unfortunately rather common at logging sites.

“The forest is far away from the public eye, only those who are involved on-site can see (when regulations are flouted).

“If the forestry ranger (who is in charge of monitoring a particular logging site) is strict, then rules will be followed. But if the ranger is not strict, it becomes a situation where corruption might happen, ” he said. 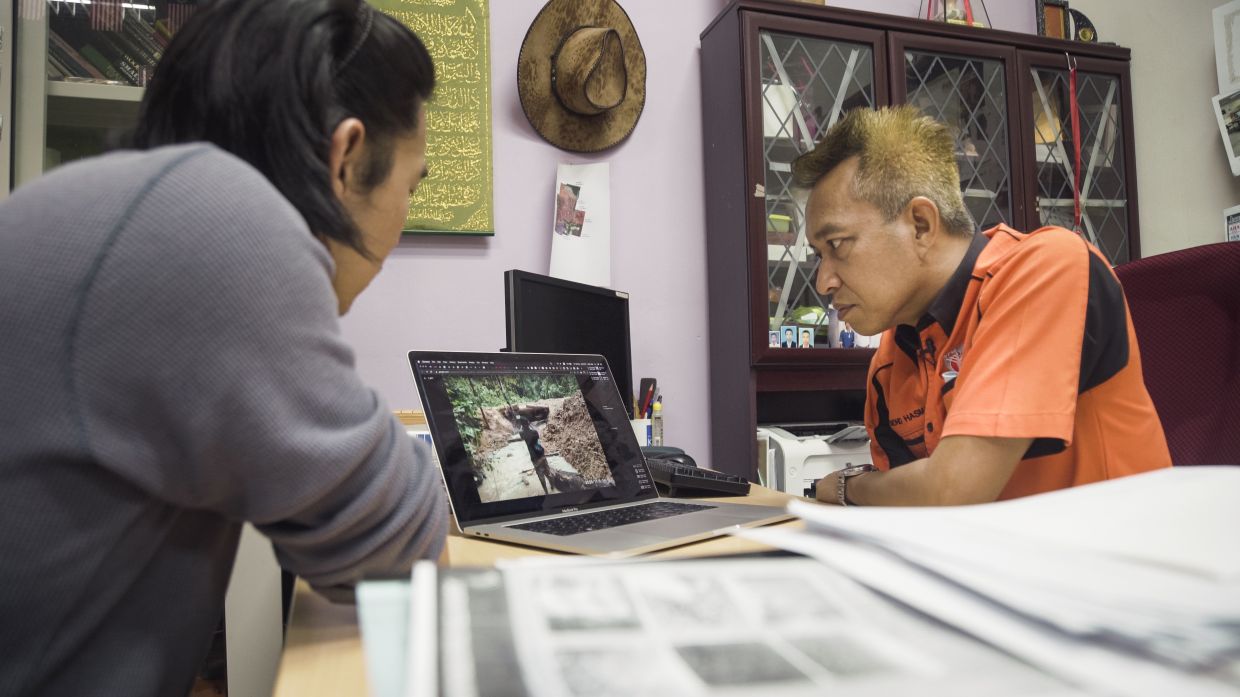 Aside from the environmental damage, the Orang Asli also claim that the logging company is encroaching on their ancestral land. Kampung Ong Jangking and Sungai Papan both claim native title rights to the wider landscape around their settlements.

Currently, that area covers parts of the Air Chepam Forest Reserve and a Felda plantation, but the Orang Asli have initiated proceedings to legalise their claim in court.

The courts, in applying principles from common law and the Federal Constitution, have in the past ruled that the Orang Asli possess native title rights to their ancestral lands.

Checks with the Perak Forestry Department show that the area licensed to the logging company lies just outside the community’s claimed ancestral land, but the main log yard – where harvested logs are gathered before they are transported out to sawmills – is located around 300m from the homes in Kampung Sungai Papan.

The logging road that brings logs from the forest to the log yard, runs within a kilometre of Kampung Ong Jangking, and affects the rivers upstream of the village.

“Seventy percent of environmental damage caused by logging activities comes from the logging roads – both the construction of, and use of the roads by heavy machinery, ” said Prof Hasmadi.

“Logging roads usually don’t impact human communities, but when they affect rivers upstream, the sediment will flow downstream and that’s when communities are affected.

“That is why monitoring (of logging activity) is important, as many logging companies do things the easy way, and just extract the logs without considering the environmental impact, ” he added.

According to standards set by the Malaysian Timber Certification Council (MTCC), logging companies are required to seek the free, prior and informed consent of the local communities that will be affected by the logging activity.

Timber harvested from forests in the state of Perak are MTCC-certified, hence all logging within the state must adhere to MTCC standards.

The Orang Asli in Kampung Ong Jangking and Sungai Papan claim they have not agreed to the logging, and can show evidence that they have been actively objecting to it since 2018.

They produced a letter dated Nov 13,2018, addressed to MTCC, stating objections from a number of Orang Asli villages in the area to the “intrusion of logging onto (Orang Asli) ancestral land”.

In July 2019, the villages built a blockade in protest against the logging, which resulted in a number of Orang Asli being detained by the authorities. Interventions by the then Minister in the Prime Minister’s Department P. Watha Moorthy led to their release, and subsequently logging activities in the area came to a halt.

In spite of the Orang Asli’s objections, Perak’s MTCC certification was renewed on July 11,2019 following an audit conducted from Feb 18 to Feb 23.

In July 2020, soon after the Covid-19 movement control order was lifted, the Orang Asli reported renewed logging activity, which has continued until today.

According to pro bono lawyers acting on behalf of the Orang Asli, authorities and logging companies have been notified of the Orang Asli’s ancestral land claims, and their intention to legalise that claim in court.

The Orang Asli have also been regularly building blockades on the logging road, which are quickly dismantled by the logging company.

However, logging activity has continued, and the Orang Asli have decided to make public their objections.

“We are the ones who have to live with the consequences of logging, ” said Anjang. “If people outside are not told about this, the loggers will just continue (to flout regulations).” 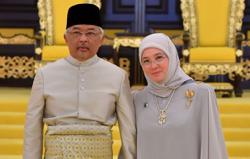