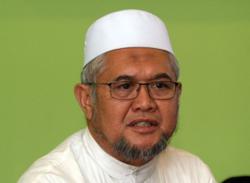 IPOH: Three Perak PAS assemblymen have apologised to Sultan Perak Sultan Nazrin Muizzuddin Shah for cancelling the audience with the Ruler on Dec 8.

Perak PAS commissioner Razman Zakaria said an official letter will be sent to His Royal Highness.

"All three of us have always pledged our loyalty towards Sultan Nazrin, therefore we humbly apologise for cancelling the audience with him," he said.

It was reported on Dec 8, Razman called off the audience with Sultan Nazrin at Istana Kinta after he was instructed by the party leadership to cancel the audience during the Perak political crisis.

The three assemblymen are Gunung Semanggol's Razman Zakaria, Selama's Mohd Akmal Kamaruddin and Kubu Gajah assemblyman Khalil Yahya. They are expected to hand over the letter of apology on Friday (Dec 11).

Separately on Thursday (Dec 10), Razman said in a Facebook post that he is confident that the spirit of solidarity and unity built between PAS and Umno would remain.

"We (PAS) will accept any decision made, even if we are not appointed to the new line-up," he said, adding that PAS was not part of the initial exco line-up appointed earlier on Dec 10.