“Through the National Water Services Commission (SPAN) which acts as the regulatory body of the national water services industry, KASA has set the key performance indicators of treated water margin reserves that need to be complied with and achieved by all state water operators at 10 to 15%, ” he told the Dewan Rakyat yesterday.

Ahmad Masrizal was responding to a question from Datuk Ahmad Nazlan Idris (BN-Jerantut) on the ministry’s initiative to address the low treated water reserve margin in the country and plans to increase water sources.

For Selangor, he said the completion of the Langat 2 Plant in 2023 would increase the treated water margin reserve to 10%.

For Kelantan, he said completion of the water treatment plant in Kg Teluk, scheduled next year, would increase the water margin reserve to 4%.

“For Kedah, five plants, for which tenders have been approved, are expected to be completed in 2023 and they will increase the water reserve margin to 21%, ” he said.

On the treated water margin reserve for the whole country, Ahmad Masrizal said: “It is at 11.5% or 1.943 million litres per day as of the second quarter of this year.”

Apart from the construction of new water treatment plants and upgrading of existing treatment plants, the initiative to reduce non-revenue water (NRW), through replacement of old and damaged pipes, as well as repair of service tanks, is carried out to increase the national treated water margin reserve.

In response to a question from Datuk Seri Tiong King Sing (GPS-Bintulu) on the approach to be taken to improve the drainage system, especially in urban areas that are prone to flash floods, Ahmad Masrizal said the Irrigation and Drainage Department (JPS) is working closely with the local authorities to address the problem.

“This can be done by further strengthening the mechanism for compliance with drainage reviews by JPS in the process of applying for planning permission for a development.

“The importance of working with local government authorities has been emphasised in several papers presented at the National Water Council and the Environmentally-Friendly Drainage Manual has also been approved for use by local authorities since 2000 through the Local Government National Council, ” he said.

“With this margin, we will be able to accommodate all unstable water disruption. The water will be there for them to supply, though it takes 48 hours to restore the water, ” she said when contacted.

She pointed out that states such as Kelantan and Kedah do not have any reserves.

“The demand is higher than what they can produce, that is why there is a negative reading. They also have significant NRW, which means they can produce that much treated water but they lose it before it can be supplied to end users.

“The capacity is there, not to say it isn’t there, but the water might be lost during the transfer. It is a serious problem to have a negative water margin, ” she said. 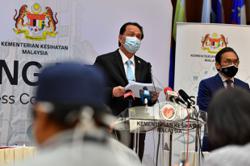