Ku Nan discharged but not acquitted 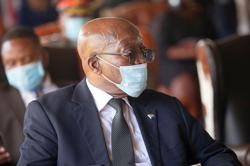 KUALA LUMPUR: A new development in the RM1mil corruption case involving Datuk Seri Tengku Adnan Tengku Mansor has resulted in him being granted a discharge not amounting to an acquittal (DNAA) by the High Court.

Justice Mohd Nazlan Mohd Ghazali granted the order of DNAA on the former Federal Territories minister after he was informed that the prosecution did not wish to continue with its case at this stage under Section 254(1) of the Criminal Procedure Code.

Under the section, the prosecution may decline to prosecute further at any stage.

“The proceedings shall be stayed and the accused shall be discharged from the same, ” said the judge yesterday.

Justice Nazlan said the court did not order a full acquittal on the basis that the prosecution had a new development that needed to be investigated.

“Having heard the submissions, in my view, the reasons submitted by the learned Deputy Public Prosecutor on the reasons of a new development, and the need to investigate the same, are the basis that justifies this court not to order a full acquittal in accordance with Section 254(3) of the Code, ” he added.

Earlier, DPP Julia Ibrahim told the court that the case was initially scheduled to resume yesterday with the cross-examination of the second witness in the case, Companies Commission of Malaysia (SSM) assistant registrar Muhammad Akmaludin Abdullah.

She said the prosecution had received an order to apply for the order of DNAA.

“There is a new development in the case that needs to be investigated further. The prosecution does not wish to waste the court’s time as it is unclear how long this could be.

“We are unable to explain the details. What we can say is there is a complaint to the Malaysian Anti-Corruption Commission (MACC) regarding a witness in this case.

“Therefore, the prosecution asks for the accused to be granted a DNAA, ” she said.

DPP Julia also informed the court that the prosecution would inform the defence of the investigation status if the latter wished to know more.

Tengku Adnan’s lawyer Datuk Tan Hock Chuan said it would be unfair if a DNAA was granted and asked that his client be given a full acquittal instead.

“My client was arrested on Nov 14,2018, and was first charged in the Sessions Court on Nov 15 that same year. The charge has been hanging on his head for two years.

“The prosecution did not give a clear time frame on how much longer they would need to investigate this new development, ” Hock Chuan said.

In 2018, Tengku Adnan, who is Putrajaya MP, was accused of corruptly receiving for himself RM1mil from businessman Datuk Tan Eng Boon.

The money was allegedly deposited into Tengku Adnan’s CIMB Bank account as an inducement to assist an application by Nucleus Properties Sdn Bhd to increase the company’s plot ratio in regard to a development project on Lot 228, Jalan Semarak, Kuala Lumpur.

Tengku Adnan also faced an alternative charge, in his capacity as federal territories minister, of receiving for himself RM1mil from Eng Boon via a Public Bank cheque belonging to Pekan Nenas Industries Sdn Bhd which was deposited into his CIMB account, knowing that Eng Boon, as a director of Nucleus Properties, had connections with his official duties.

On Sept 17,2019, Eng Boon pleaded guilty to an alternative charge of abetting Tengku Adnan and was fined RM1.5mil.

Tengku Adnan then filed an application to recuse Justice Nazlan from hearing the case on grounds that the judge had read and considered the facts in the case of Eng Boon.

Justice Nazlan dismissed Tengku Adnan’s application which led him to appeal at the Court of Appeal.

In February, the appellate court ruled in favour of Tengku Adnan and ordered the trial to be heard before another judge on the grounds that Justice Nazlan could be biased.

However, on July 17, a three-member bench of the Federal Court reversed the Court of Appeal’s decision and the case was remitted back before Justice Nazlan.

Tengku Adnan is also facing another corruption charge where he is accused of receiving a total of RM2mil from businessman Tan Sri Chai Kin Kong, who is Aset Kayamas Sdn Bhd (AKSB) director.

The trial High Court judge Justice Mohamed Zaini Mazlan had concluded and the case was fixed for decision on Dec 21.