PETALING JAYA: Even the party with the largest number of state assemblymen in Perak would not be able to install its candidate as the next mentri besar if the person cannot garner enough majority from all the state assemblymen across all parties, says constitutional expert Emeritus Prof Datuk Dr Shad Saleem Faruqi.

He pointed out that in the case of the Perak state assembly, which ousted its Mentri Besar Datuk Seri Ahmad Faizal Azumu of the Perikatan Nasional coalition through a vote of confidence on Dec 4, the most important rule is that whoever is proposed as the next MB, he or she must have support of the majority to be appointed by the Sultan of Perak.

He also said that when an MB is ousted or has resigned, all other appointed executive council members must step down in pursuance of the principle of collective ministerial responsibility.

“This is in accordance with the Sabah case of Datuk Amir Kahar v Tun Mohd Said (1995), ” said Shad Saleem.

The ousted MB can turn to the Sultan and request for a dissolution of the state assembly to call for a fresh state election, he said.

The Sultan, however, has a right to refuse, as happened in the 2009 Perak constitutional crisis, he added.

Mohammad Nizar Jamaluddin, who was MB then, requested for the state assembly to be dissolved and called for new elections, but the Sultan refused.

Instead, Barisan, with support from the three defecting assemblymen, formed the new state government with Datuk Seri Zambry Abdul Kadir as MB.

Nizar took his case to court, but in Feb 2010, the Federal Court confirmed Zambry as MB.

“In Perak, if what had just happened indeed was a rebellion from within the ruling coalition which ousted the MB, then convention demands the Sultan step in to appoint the MB.

“But if the Perikatan coalition stays intact even after voting out Faizal, it would be akin to a football team having decided to change its captain, ” said Shad Saleem.

The vote of confidence for Faizal on Dec 4 was mooted by Umno, which was also part of the ruling government until then.

It is said that despite that, only one of the 25 Umno state assemblymen voted for Faizal, which has now caused a rift between Perikatan parties Bersatu, PAS and Umno.

Shad Saleem explained that despite the provisions in the state constitution, convention rules that the first bite of the cherry must be given to the party with the largest number of state assemblymen.

“This means Umno gets the first bite of cherry for the MB’s post in Perak, ” he said.

He stressed that the candidate for the MB’s post need not be from the party with the largest number of state legislators, as seen in the appointment of Faizal as MB after he garnered enough support from assemblymen of different parties, even though he was the sole Parti Pribumi Bersatu Malaysia assemblyman.

“If all fails, then the Ruler of the State has the right to intervene and find a candidate, who can even be an independent state assemblyman, ” said Shad Saleem.

Chenderiang state assemblyman Faizal lost a motion of confidence in him as Perak Mentri Besar on Dec 4, having received 10 votes in favour, 48 against and one abstention. 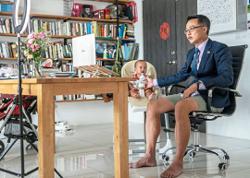