The 26-year-old officer was arrested after being caught red-handed by Selangor Malaysian Anti-Corruption Commission officers on Wednesday (Dec 2).

He was said to have been nabbed by anti-graft officers while he was accepting the bribe at a petrol station near KLIA around 7pm.

Sources said the suspect had demanded money for the release of two Chinese nationals who were arrested on Nov 30.

The foreigners were arrested over suspicion of using fake immigration stamps.

"The suspect's activities are not part of the Ops Selat syndicate. Investigation revealed that he acts alone and has been doing this for some time now," said sources.

Sources said it was discovered that the Immigration officer would provide agents with details of Chinese nationals who were arrested for immigration violations at KLIA.

"The agents will contact family members of those arrested to ask for money to secure their release," said a source. 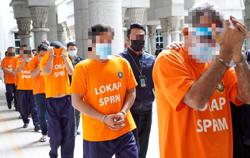