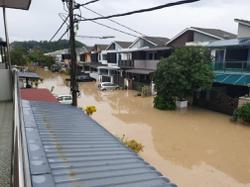 Ipoh City councillor Dr Richard Ng said despite the rainy season being predictable each year from October to December, this time, the amount of rainfall is much higher.

“As a result, the drainage system in Ipoh is not able to cope with such a huge amount of water.

“Matters become worse with clogged drains, and choking rivers due to garbage being thrown into the river by irresponsible residents, ” he added.

Ng said he had brought the matter up with the city council and the Drainage and Irrigation Department (DID) for proactive measures to be taken before the situation gets worse.

He said among the suggestions is to get the council-appointed contractor, Puncak Emas Infra, to clean up clogged drains, especially at flood-prone areas.

"DID should also allocate enough funds to make these rivers deeper and clean up all garbage and tree branches that could block the flow of water before the rainy season, ” he added.

“At the same time, the council should identify drains that need to be widened or replaced to cope with the huge amount of water.

“A study on the whole drainage system needs to be conducted to ensure they can cope with increased water volume due to climate change.

“Water pumps placed at selected places to mitigate flood must also be checked frequently, ” he added.

Ng said it was important that the state government reviews the ban of plastics, which has been put on hold since 2017.

He said most of the garbage that clogged the drains and caused flash floods consists of plastics.

“We must start to ban the use of polystyrene and microplastics which take hundreds of years to decompose and stop them from ending up in the drains, rivers and even landfills.

“Plastics at the landfills exposed to sunlight will produce methane gas which increases greenhouse gases and cause global warming.

“The government must also step up enforcement to catch culprits who throw garbage indiscriminately, and heavier compounds must be imposed, ” he added.

Ng said the society on the other hand must play their part by embracing recycling and stop using plastics.

He said they should bring reusable bags when shopping, and carry a tiffin carrier when they pack their food from eateries. 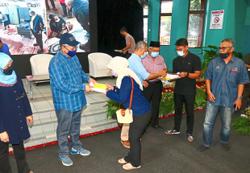