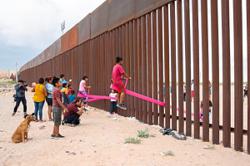 KANGAR: The Non-Pensionable Malaysian Armed Forces Veterans Association (PVATTBM) has urged the government to rush the building of a border wall along the Malaysian-Thai border in Perlis and Kedah to combat smugglers.

Its president Datuk Ismail Abidin said construction of the wall was the best solution to reduce the risk of Malaysian security personnel being exposed to the threat of being shot by smugglers.

“A border wall will also help in curbing smuggling activities, ” he said yesterday.

“The border with its thick forest allows smugglers to act violently against Malaysian security forces before they escape, ” he said.

On Tuesday, Sjn Baharuddin Ramli, 54, of the 3rd Battalion (Senoi Praaq), Northern Brigade of the General Operations Force (GOF), was killed after being shot by smugglers near Padang Besar while his colleague Sjn Norihan Tari, 39, was seriously injured. The following day, another GOF personnel was injured after being shot while on duty at the Malaysian-Thailand border near Bukit Kayu Hitam at about 6.15pm.

Separately, the main suspect in the shooting was among three locals and a Thai national remanded for a week to assist in investigations.

The four suspects, aged between 26 and 45, were clad in lock-up attire and in handcuffs.

They arrived at the court complex at 9.10am yesterday and were taken out of the remand room about 50 minutes later. 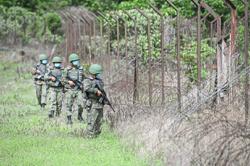