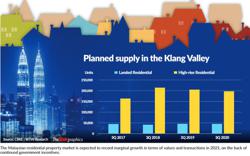 KUALA LUMPUR: Some RM20bil worth of residential properties remain unsold due to an overhang, says Housing and Local Government Minister Zuraida Kamaruddin (pic).

"Based on the First Quarter 2020 Property Market Report by the National Property Information Centre (Napic), a total of 31,661 completed units remain unsold with a value of RM20.03bil," she said when answering a question by Datuk Ahmad Jazlan Yaakub (BN-Machang) in the Dewan Rakyat on Wednesday (Nov 25).

She added that this was an increase of 3.3% in the number of unsold units and an increase in the value compared to the same period last year.

Zuraida said the overhang in residential units was due to several factors such as a mismatch in pricing and location.

She added that the difficulty for potential buyers in obtaining bank loans was also a factor.

To overcome this, she said that her ministry is currently developing a Housing Integrated Management System (HIMS) to replace the current data record system.

The new system, she added, would contain details such as developers' licence, management and control of projects, enforcement, and residential ownership in private housing projects.

She said the new system is expected to be completed by the middle of next year.

However, she acknowledged that state governments have control over housing development projects in their states.

In this respect, Zuraida said her ministry will carry out an analysis on the housing sector in the first quarter of next year.

She added that the data from the analysis will be used as a basis for the ministry to advise the state governments to better plan and implement housing policies.