JOHOR BARU: Police have arrested a 21-year-old man to help with investigations into a snatch theft attempt at a petrol station at Lebuh Cemerlang here.

Seri Alam OCPD Supt Ismail Dollah said the incident occurred on Monday (Nov 23) at about 9.45pm when a 26-year-old woman was inside the toilet at the petrol station.

“The suspect had entered the toilet and tried to snatch the victim’s handbag but failed after the victim fought back and pushed him away.

“The suspect then ran away after the victim shouted for help. He was later arrested near the area by a patrol team, ” he said in a statement here on Wednesday (Nov 25).

He added that the suspect is currently under remand for five days from Tuesday (Nov 24) until Saturday (Nov 28).

“The police would like to take this opportunity to remind the public to always remain vigilant especially when using the toilet in public places, ” he said, adding that the case is being investigated under Section 393 of the Penal Code for attempted robbery which carries a maximum seven-year jail term and fine upon conviction. 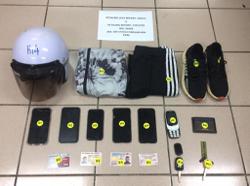