PM: Time to get innovative 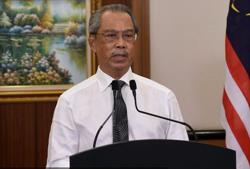 KUALA LUMPUR: Adapting to the digital economy and continuous innovation are the survival skills needed to get employed and for businesses to remain relevant amid the unprecedented challenges following the health pandemic, says Tan Sri Muhyiddin Yassin.

The Prime Minister added that innovation and digitalisation were fundamentals within this context as these enablers not only facilitated efforts to reinvigorate economic activities but also safeguarded the health and well-being of the people.

He said the Covid-19 pandemic had shown that technology could step in and sustain communities when movement was restricted.

“However, without sufficient infrastructure and close cooperation between the public and private sectors, we run the risk of excluding vulnerable groups due to their lack of access to digital tools.

“Promoting digital inclusion and narrowing the digital divide by increasing investments in ICT (information and communication technology) infrastructure for these groups is therefore a must, ” he said in his keynote address at the virtual Apec CEO Dialogues 2020 yesterday.

Apec economies comprise approximately 60% of global gross domestic product (GDP), half of the world’s global trade and 40% of the world’s population.

Muhyiddin said continuous innovation was beyond mandatory in this era as it was a pre-requisite for businesses to remain relevant.

The Prime Minister also emphasised the priority of inclusive economic growth to ensure that no one was left behind.

“We must continue to adopt economic approaches that place a specific emphasis on women and youth – the backbone of the region’s economy, ” he said.

Muhyiddin noted that the youth must also not be left behind and ensure that the younger generation was equipped with the right skills and knowledge that enabled them to contribute effectively to society.

“Even today, there is much room for us to improve the narrative of trade and investment with a view to bring tangible benefits to all our people.

“It is in this spirit that we hope to implement the Apec Post-2020 Vision. This vision, which is set to replace the Bogor Goals that reach maturity at the end of this year, will guide the work of Apec for decades to come, ” he added.

Muhyiddin said Apec must also reaffirm its support and commitment for the rules-based multilateral trading system that was essential for businesses, as market stability and predictability were the central pillars ensuring that trade and investment continued to flow even during times of crisis.

“A well-functioning dispute settlement mechanism at the World Trade Organisation (WTO), which serves as a primary pathway for countries to settle their differences, is also critical in this regard.

“Of similar importance is the need to recommit ourselves to Apec’s core and enduring goal of free and open trade and investment in the region.

Muhyiddin said as an economic entity, Apec must remain sensitive to the needs of the private sector and continued to cultivate an environment that enhanced business confidence.

He noted that Apec assumed a central role in spearheading post-pandemic economic recovery and the region needed to trade and invest its way out of the current economic downturn.

“We must come together and work constructively towards navigating the region along a path of robust, inclusive and sustainable economic recovery and growth, ” he added.

Themed “Apec Re-Imagined: Priorities in the Aftermath of Covid-19”, the event was hosted by the Apec Business Advisory Council. —Bernama