Good move: Shamshul and Chong have lauded the government’s initiatives.

PETALING JAYA: Malaysians relying on public transport for their daily commute say the Perikatan Nasional government’s initiative in allowing them unlimited use of Rapid bus and rail services for a low monthly fee is a lifeline.

Fequent public transport user Shamshul Fitri, 41, said the extended My30 unlimited travel pass will benefit him and his wife who travel from their home in Kajang to Kuala Lumpur city for work.

“Previously, I took up the My100 travel pass too. I believe the extended My30 will continue to benefit many more commuters.

“Compared with driving to work, it helped me save up to RM400 a month in tolls and petrol, ” said the public relations manager whose office is in Jalan Bangsar.

He said he prefers using public transport anytime because “it is less stressful”.

“Since I need to switch lines during the commute, I also get to exercise from the walk!” he said.

Communications executive Kelvin Khew said he is happy that the My30 unlimited travel monthly pass will be extended.

“I hope it will continue to benefit commuters like me and encourage more people to make land public transport their choice of transport, ” said Khew, who commutes regularly between Kajang and KL Sentral using the Kajang MRT Line.

Najwa Hassan, 37, a bank executive from Kajang, said she managed to save a lot in petrol and parking fee as her office is in the heart of the KL city.

“As an M40, my salary is just enough to cover my commitment and daily expenses. I use the MRT to work and My30 is very helpful for me to manage my expenses, ” said Najwa, who started using the travel pass in August to commute daily on the Kajang-Pasar Seni MRT line to work.

While lauding the well-maintained stations, she said the MRT parking area in Kajang should be well lit so that commuters who work late feel safe when getting to their cars to go home.

She also suggested a lower parking fee at the MRT stations since it is part of the infrastructure.

Pensioner Joseph Cheah, 62, who has a car, regularly uses his Mutiara Pass to board the bus from Tanjung Bungah to Campbell Street in George Town.

“If only there was rail transit in Penang, then the My30 pass would really be worth it, ” he said, adding that he is nonetheless happy to hear that Penang will get the My30 pass soon.

“If I drive, I would be spending several ringgit on parking and petrol. This sounds like a small amount for others but it is something important to me, ” he added.

My30 was first announced on June 15 to recover lost ridership in the Klang Valley following the severe impact brought on by the Covid-19 pandemic and was supposed to run until Dec 31 this year.

At the moment, Prasarana has an unlimited travel pass in Penang branded as Mutiara Pass that costs RM50 a month.

He also suggested that more Road Transport Department kiosks for key services be made available.

“It would certainly reduce the long queues at the counters of JPJ branches nationwide. The special grant for taxi drivers, e-hailing drivers, rental cars drivers and tour guides in Sabah will be timely assistance for many as the state’s economic activities are badly hit by the Covid-19 pandemic, ” he said.

With many states in the peninsula also under the conditional movement control order, Chong called for the previous RM500 one-off aid for targeted e-hailing drivers to be given to all with a valid passenger service vehicle (PSV) licence.

He called for more long-term assistance to be considered to help the drivers stay afloat so that their livelihood is secure and families have access to what they need. 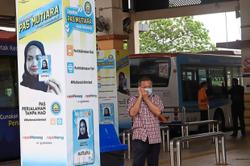