KUALA LUMPUR: Umno is a political party that practises the whip system where its MPs must toe the party line, says Tan Sri Annuar Musa.

The Barisan Nasional secretary-general was responding to Umno veteran Tengku Razaleigh Hamzah who called for MPs not to toe party lines when they vote for Budget 2021 on Nov 26.

“That is his personal opinion. But every party has their stand and Barisan’s stand is that we support Budget 2021 while we proposed certain improvements.

“Conventionally, we are all MPs chosen by the party. We also practise the whip system and the chief whip has ordered to support Budget 2021.

“If we refuse to heed the party’s decision, then be ready for certain party action to be taken, ” he said during a press conference in Parliament on Thursday (Nov 19).

Tengku Razaleigh, better known as Ku Li, was also quoted in a news report as saying that Umno should have been the dominant party in the government with its leaders holding important portfolios.

Annuar said politicians must focus on working for the people rather than squabbling about positions.

“Positions isn’t owned by us. We were given the responsibility to serve the people and it is very wrong if, at this moment, leaders are trying to insinuate the matter.

“Because we have already agreed prior to the government’s formation. Although Umno has a lot of members, we also realise that we can’t form the government ourselves, ” said Annuar, as he referred to incidents that happened during the “Sheraton Move”.

The Sheraton Move was a week-long political crisis that saw the eventual collapse of the Pakatan Harapan government after the exit of Parti Pribumi Bersatu Malaysia (Bersatu) and former PKR MPs led by Datuk Seri Mohamed Azmin Ali. 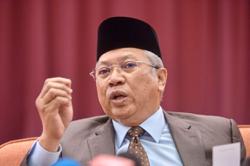