By JO TIMBOUNG and ALLISON LAI

PETALING JAYA: The Kuala Lumpur City Hall’s (DBKL) announcement to restrict the sale of hard liquor in shops from next year is “untimely”, said the Federation of Sundry Goods Merchants Association of Malaysia.

“This is because the majority of businesses are still hard hit and trying to recover from the pandemic, ” said its president Hong Chee Meng.“Perhaps we can work on this later when things get better.”

He said although the ruling was only in Kuala Lumpur, the capital city was an important business area due to high economic activities and population density.

“Wouldn’t it be better to perhaps set a limit on purchase timeframe and quantity, or making it compulsory for buyers to leave their personal details?” he said in an interview yesterday.

He added that sales of hard liquor were not high in their overall sales.

Hong also said such restrictions might encourage the sales of illegal liquor, leading to a loss of income in tax collection for the local authority.

Coffee shop owners said although they might not be affected much by the new guidelines, they hope DBKL could make the details clearer to avoid confusion.

Malaysia Singapore Coffee Shop Proprietors’ General Association president Datuk Ho Su Mong said while the sale of beer was still allowed in coffee shops, he believed the authorities should also allow customers to bring and consume their own hard liquor.

“We know we cannot sell hard liquor but I don’t think we should stop customers from bringing their own and consuming them in coffee shops, ” he said.

Ho added that coffee shop owners were also ready to advise customers to abide by a stipulated timeframe to consume their liquor at their premises.

“We have conformed to the business hours imposed during the conditional MCO and follow the standard operating procedure, so I don’t think we will have a problem following a timeframe, ” he said.

“However, the regulators could have collected some consensus and feedback from various trade associations before gazetting these guidelines, ” he said.

On Monday, DBKL announced that starting Oct 1 next year, sundry and grocery shops, convenience stores as well as Chinese medicine shops in Kuala Lumpur will not be allowed to sell hard liquor.

However, pure or mixed liquor products in traditional medicine will be exempted from this ruling and beer will still be allowed to be sold at these premises from 7am to 9pm although it must be placed separately from other beverages.

Starting Dec 15, the production, sale and consumption of samsu, a cheap intoxicating liquor, is illegal in Kuala Lumpur.

The guidelines also stipulated that businesses that sell hard liquor also cannot be in front of police stations, places of worship, schools and hospitals. 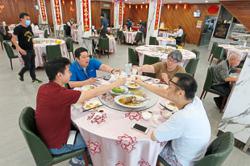