PETALING JAYA: Stakeholders have welcomed the government’s Labour Recalibration Plan that will enable employers to hire undocumented workers, saying it will help them solve the issue of worker shortage.

Players from construction, manufacturing, plantation and agriculture sectors, however, hope the initiative could begin as soon as possible.

Master Builders Association Malaysia (MBAM) president Foo Chek Lee said they were happy with the announcement as there was a massive shortage of general workers needed at construction sites.

He said general workers are those who would be involved in unskilled and manual work such as lifting stones, washing lorries and cleaning sites.

“Please make the process simple and not stringent so that it is easy to meet the qualifications for application. It is important to revive the economy and get jobs started. At present, the industry is not 100% fully operational,” Foo said.

He also hoped the process and approval would not take too long, as anything more than a month would defeat the purpose of the initiative.

“Some sub contractors are there for four to five months. They would then shift to other jobs,” he said.

He said some sectors, especially those exporting goods such as furniture and glove manufacturing industries had a shortage of workers, with locals not willing to take up these positions.

“We would like more details on the programme such as the cost involved for hiring,” he said.

Malaysian Agricultural Plantation Association (MAPA) executive director Mohamad Audong said the programme was timely as there was a shortage of 60,000 workers in the industry.

“The shortage is acute. We tried hiring locals and offered jobs to those who were retrenched from other sectors but they were not interested,” he said.

Malaysian Palm Oil Association (MPOA) chief executive officer Datuk Mohamad Nageeb Ahmad Abdul Wahab is looking forward to the move, saying that even during pre-Covid-19 days, they were short of 36,000 workers. He believes that number could have doubled since.

Since the pandemic, the government has frozen the intake of foreign workers and has not allowed those who went on leave to come back and work, said Nageeb.

“We hope it happens soon. There are many undocumented migrants in the country, so this will help us. We made a lot of effort to try to hire locals but the response was lukewarm,” he said, adding that they had yet to receive any official proposal on the programme.

Malaysian Employers Federation executive director Datuk Shamsuddin Bardan welcomed the government’s decision, saying that it is a win-win situation for both employers and foreign workers.

“This is something that MEF has been fighting and proposing and the government accepted it since they froze the intake of new foreign workers.

“Although they are allowed to work, they must first meet all the criteria. The move to allow foreign workers to decide whether they want to return is a win-win situation.

“Those who want to go back can come forward. This will allow the government to monitor them instead of them using illegal channels,” he said.

Philippines Ambassador Charles C. Jose said the programme was a welcome development but hoped it would also cover Sabah to benefit undocumented Filipinos working in oil palm and rubber plantations there.

“Full details of the plan, however, still need to be carefully studied,” he said. 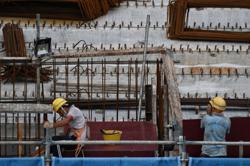