PUTRAJAYA: Employers who want to participate in the Labour Recalibration Plan for undocumented migrants must ensure they are not blacklisted for immigration offences, says Datuk Khairul Dzaimee Daud.

He said employers are to submit application letters and complete information of their company, as well as information on undocumented migrants they are planning to employ.

“With the information given, we will check on the status of the companies, to ensure that employers who are applying for this are not blacklisted by the department, ” he said on Friday (Nov 13).

Khairul reiterated that only employers in four sectors - construction, manufacturing, plantation and agriculture will be allowed to participate in this programme.

Employers are to submit applications via email to rekalibrasi@imi.gov.my.

He said applicants are also to check with the Peninsular Malaysia Labour Department for information regarding the programme that involves the department.

He said announcements regarding the Repatriation Recalibration Plan and the Labour Recalibration Plan will be made from time to time and the public can submit queries via the Immigration Department’s online question system at hppt://eapp.imi.gov.my/spo.

On Thursday (Nov 12), the Home Ministry announced that employers in the construction, manufacturing, plantation and agriculture sectors will be allowed to legally employ undocumented foreign workers under the Labour Recalibration Plan for undocumented migrants.

Minister Datuk Seri Hamzah Zainudin said the government will also roll out the Repatriation Recalibration Plan, where the migrants can volunteer to return to their homeland, subject to certain conditions.

The Labour Recalibration and the Repatriation Recalibration plans are for employers and undocumented migrants in Peninsular Malaysia.

The government emphasised that allowing undocumented migrants to be legally employed would not threaten job opportunities for Malaysians.

For now, only employers in the four sectors whose operations are considered 3D - dangerous, difficult and dirty - would be allowed to employ undocumented migrants as workers.

A special committee co-chaired by the Home and Human Resources ministers would look into the possibility of expanding the recalibration plan for undocumented migrants to other sectors, besides policy on employment of expatriates.

After the plans expire on June 30 next year, the Immigration Department would kick off its Undocumented Immigrants Holistic Enforcement Plan, which would see mass enforcement activities.

Employers found guilty of hiring foreigners without valid permits will be given the maximum penalty of RM50,000 fine and jailed up to 12 months for each undocumented immigrant employed, and those hiring more than five will also be given the rotan. 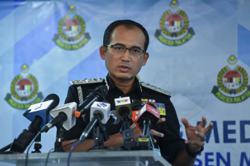