PETALING JAYA: There is no need to scan the MySejahtera app when filling up fuel or making payments at the pump when at petrol stations, says Senior Minister Datuk Seri Ismail Sabri Yaakob.

The Defence Minister, however, clarified that this only applied to those who made electronic payments at the pump.

He said those going into the convenience stores, surau or other facilities at the petrol stations would have to scan the MySejahtera app or register their details.

There was confusion earlier following a report quoting the police as saying that anyone filling fuel at petrol stations had to scan the MySejahtera app.

This was regardless whether the individual entered the station’s convenience store or otherwise.

Recently, there was a viral audio clip of a man who alleged that his father was slapped with a RM1,000 fine because he did not scan the MySejahtera app when refuelling his vehicle.

No need to use MySejahtera app when filling up petrol, clarifies Petrol Dealers Association chief 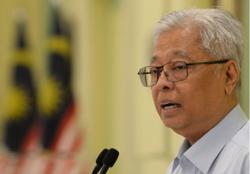