“Referring to a Buletin 1.30 news yesterday, we would like to apologise for an oversight on US vice president-elect Kamala Harris. She is actually the daughter of immigrants from Jamaica and India, and not as reported.

“We regret over the error on her background, ” TV3 said on Monday (Nov 9).

The TV news report on Sunday (Nov 8) had drawn the ire of many.

A video clip of the news report had been making its rounds all over social media, with many calling out the TV channel to issue an apology.

“Kamala, 55, created history when she became the first woman to be elected as vice president in the United States.

“The daughter of a Jamaican couple and an illegal immigrant from India, she also broke a stigma when she became the first black-skinned woman to serve as the attorney-general of California, ” the report said.

In actual fact, Harris’ mother Shymala Gopalan was a biomedical scientist and had moved from India to the US to pursue her studies.

Shymala was 19 years old in 1958, when she was accepted to a masters programme in nutrition and endocrinology at the University of California, Berkeley.

At the same university, she met her husband, Donald J. Harris, a Jamaican economics student who eventually became a professor at Stanford University.

Twitter user Kumar wrote: “Mother was a research scientist in cancer and was offered a place to work in a prestigious university... not an illegal immigrant.”

When contacted, the US embassy said it will not issue any comment on the matter.

Harris was called as the vice president-elect after the US election projected results had shown that she and president-elect Joe Biden had passed the 270 electoral votes needed to win. 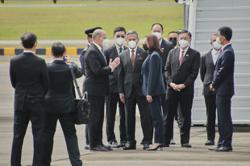