GEORGE TOWN: Police will mount roadblocks in several areas in the state following the implementation of the conditional movement control order (MCO) from Nov 9.

George Town OCPD Asst Comm Soffian Santong said in the northeast district, the roadblocks will be set up at five locations from 12.01am on Nov 9.

"The roadblocks will be mounted in the same way during the conditional MCO a few months ago," he said.

It is understood that the Malaysian Armed Forces will also be involved in the one-month operation.

In North Seberang Prai, nine roadblocks will be set up along the border of Penang-Kedah to monitor the movement of vehicles coming in and out from the state.

He said a total of 160 officers and personnel comprising the police, armed forces, APM and Rela would be on duty at the roadblocks.

Meanwhile, several roadblocks will also be mounted by police at several strategic locations at Central and South Seberang Prai districts.

The roadblocks will focus on preventing the inter-district and interstate travelling during the conditional MCO period.

On Saturday (Nov 7), Senior Minister Datuk Seri Ismail Sabri Yaakob announced that conditional MCO would be imposed on all states in Peninsular Malaysia except for Kelantan, Perlis and Pahang from Nov 9 until Dec 6.

He said the decision was made after the Health Ministry discovered that there has been a significant increase in Covid-19 positive cases as well as rate of infections in Kedah, Penang, Perak, Negri Sembilan, Melaka, Johor and Terengganu. 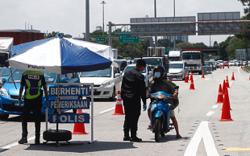