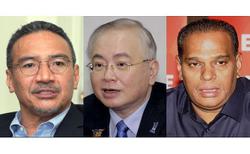 KUALA LUMPUR: The question on whether Prime Minister Tan Sri Muhyiddin Yassin should step down are among issues to be discussed by Barisan Nasional MPs at a meeting at PWTC on Monday (Oct 26).

"That’s what we are discussing it.

He was asked if there is a need for Muhyiddin to step down following calls from several quarters to do so.

Asked whether Umno would continue to support Muhyiddin, the newly minted Barisan treasurer-general said that he was unable to answer pending Umno's supreme council meeting to be held later on Monday night.

"I don’t know. We have to wait for Umno meeting first," he said.

Hishammuddin was among several Barisan ministers who rushed over to PWTC to attend the meeting after meeting Muhyiddin, who chaired a special Cabinet meeting in Putrajaya earlier.

It was learned that the meeting was a pre-council meeting involving Barisan MPs to discuss matters before the start of Dewan Rakyat on Nov 2.

The meeting comes at the backdrop of the King' announcement on Sunday (Oct 25) that there was no need to declare a state of emergency in the country amidst the Covid-19 pandemic after consulting the Malay Rulers.

The King also reminded all politicians, particularly lawmakers, to immediately put a stop to all forms of politicking that could disrupt the stability of the country, adding that he had confidence in the current administration in dealing with Covid-19.