DUNGUN: A man and his daughter were killed after their car collided with another vehicle at the 61st kilometre of Jalan Jerangau-Jabor here.

The man, who was driving, was trying to avoid a python crossing the road.

“It is understood that the Proton Gen 2 car driven by Mohamed swerved into the opposite lane and collided with a Mitsubishi Triton driven by a man in his 50s.

“Both victims in the Proton Gen 2 died instantly.

“The driver of the Triton sustained light injuries and received treatment at a nearby clinic, ” Supt Baharudin said yesterday.

He said the remains of the father and daughter were taken to Dungun Hospital.

The case is being investigated under Section 41 of the Road Transport Act 1987. — Bernama 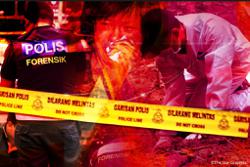