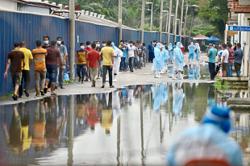 PUTRAJAYA: The number of new Covid-19 cases in Malaysia is showing no ssign of slowing down and remained above the 800 mark for the third consecutive day.

The bulk of the new cases continues to come from Sabah, with 643 new infections or 74.3% reported in the state alone.

“This is due to the increased number of tests that we are able to do in Sabah and the ones sent to Peninsular Malaysia, ” Dr Noor Hisham told a press conference yesterday.

He said there were three new deaths, taking the nationwide total to 190.

The Health Ministry detected two new clusters in Selangor and Melaka, bringing the total number of active clusters in the country to 87.

The Hentian cluster in Hulu Langat has seven cases attributed to it, while the Bukit cluster in Melaka has 15 cases so far.

Dr Noor Hisham said 31 of the 87 active clusters in the country had recorded new cases.

The biggest increase was at the Kepayan Prison cluster in Sabah which saw another 135 new cases, bringing the total to 184.

The Tembok cluster, the country’s largest and most active cluster, saw one new case. The cluster, which is centred on the Alor Setar prison, has recorded 1,572 cases so far.

The Benteng LD cluster, which is based at the Tawau prison and the Lahad Datu police headquarters lock-up, saw 15 new cases, bringing its total to 1,065.

The total number of active cases in the country has now gone up to 7,436 cases. Cumulatively, Malaysia has 21,363 cases.

Currently, 99 people are being treated at intensive care units, with 32 requiring ventilator support.

Meanwhile, Dr Noor Hisham said there was no evidence that Covid-19 could be transmitted through food or food packaging.

“It is highly unlikely that one can contract Covid-19 from food or food packaging. Covid-19 is indeed a respiratory infection.

“Its route of transmission is through droplets, close contact from one person to another or indirectly on surfaces, ” he added.

There were reports claiming the Chinese Centre for Disease Control and Prevention had detected Covid-19 on the outer packaging of imported frozen cod in the coastal city of Qingdao, Shandong province. 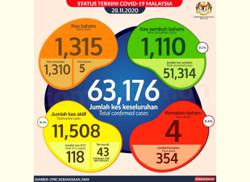