KOTA KINABALU: Former chief minister Tan Sri Musa Aman has rejected aspersions that the unprecedented Covid-19 spike in Sabah was triggered by his failed July 29 bid to take back the state government through defections.

In an open letter to the people of Malaysia, Musa said he wanted to set the record straight that he was not the “original sin” as alleged by his opponents in the Warisan Plus coalition who have been blaming him as the trigger for the Sept 26 state polls.

He said Warisan Plus, led by Datuk Seri Mohd Shafie Apdal, should admit to the spike in cases by calling for the state election and not blame him (Musa) and the Gabungan Rakyat Sabah government.

He said Warisan Plus was unhappy after losing the state elections and its component party leaders began an onslaught of finger-pointing including DAP’s Lim Kit Siang “conveniently blaming my attempt to overthrow Shafie".

Musa said that DAP was continuously attempting to mislead the people with Seputeh MP Teresa Kok insisting that the Sabah polls were triggered by him (Musa).

“(She claims) I tried to topple the Warisan Plus government by forming a 'backdoor government' and further accused my action as the 'original sin' that led to the surge in cases, ” he said.

Musa reminded Kok and other Pakatan Harapan leaders that the Warisan Plus coalition fully supported Shafie in advising the Yang di-Pertua Negeri to dissolve the Sabah Assembly on July 30 to pave the way for snap elections.

"It was Shafie who, in a widely circulated video, said he would rather die than hand back power to me, which is ironic because he was the one who stole the government from us in the first place, right after GE14, ” Musa said.

Musa said Warisan Plus and Pakatan should also remember that they formed the state government through the backdoor when they ousted him as chief minister after the 2018 general election.

“Shafie pushed for the elections because he realised he had lost the confidence of the majority of his assemblymen.

“Instead of being a gentleman about it, he chose to be reckless by advising the Governor to dissolve the assembly and go to the polls despite knowing the repercussions doing so amid a pandemic, ” said Musa.

He added that Shafie should have resigned responsibly instead of recklessly plunging Sabah into an election during the Covid-19 pandemic.

He also said in other states, mentris besar and chief ministers acted responsibly and resigned when their respective governments fell after a change in leadership in Putrajaya earlier this year.

Musa had claimed he had 33 out of 65 assemblymen supporting his return as chief minister but Shafie moved to seek dissolution of the state assembly with the consent of the Governor on July 30. 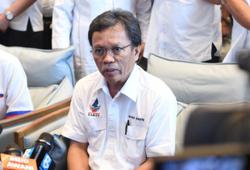