PUTRAJAYA: The Enforcement Agency Integrity Commission (EAIC) has opened investigation papers and started preliminary investigation into an incident where a suspect had escaped from being rearrested by the police.Its chairman Tan Sri Mohd Sidek Hassan said the commission viewed the incident seriously and wanted to know how this could have happened.

“We are in the process of taking action in line with provisions under the Enforcement Agency Integrity Commission Act.

“The commission has also opened investigation papers and is doing preliminary investigation into the incident. We will make known the next course of action to be taken regarding this matter, ” he said yesterday.

On Oct 11, a suspected member of an online gambling and Macau scam syndicate who was out on a Malaysian Anti-Corruption Commission (MACC) bail fled to avoid being rearrested by the police.

He and eight others had spent several days under MACC remand and on that day, they were taken to court to have the remand order lifted and were taken back to the commission’s headquarters for bail procedures.

The police were there to rearrest the suspect to help in their investigation into the same case and were waiting at the main gate of the MACC headquarters.

The suspect, after having his bail posted and documentation process completed, was handed over to his bailor. An MACC officer had escorted him to a waiting vehicle and the MPV drove off.

However, according to sources, along the journey to the main gate, the suspect could have gotten out of the vehicle and fled with the help of two bodyguards to avoid being rearrested by the police.

The MACC has questioned more than a dozen people, including senior police officers, in its investigations into the racket which was believed to have received protection from certain authorities. 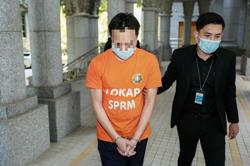