The flood waters near a petrol station in Telipok in Kota Kinabalu, it begun to recede a little slightly from noon on Monday

Dozens of parked cars were partially submerged in floodwaters in the outlying areas of the city, while many offices and schools saw low turnout following the heavy showers as well as Covid-19 concerns in the city.

Social media users reported floods along Jalan Tuaran and Telipok, villages in Inanam and Manggatal within the city limits, as well as parts of neighbouring Penampang and Tuaran due to the heavy rains that begun to ease by noon Monday (Oct 5).

Certain roads in Penampang were passable to heavy vehicles, while by noon, water levels began to rise in Penampang area.

Firemen are also on alert for any distress calls and have been deployed to assist in the event of any eventualities.

Sabah Fire and Rescue Department said they have received reports of flooding in Taman Telipok Jaya along Jalan Tuaran, Kampung Kaulan in Tuaran.

So far, there have been no reports of any casualties.

Minor landslips along the Tamparuli-Ranau road were also reported by social media users.

Meteorologists expect the bad weather conditions to persist in west coast and interior Sabah for the next 48 hours.

Among the other districts to be affected were Sipitang, Tenom, Kuala Penyu, Beaufort and Keningau, as well as Kota Kinabalu, Tuaran, Kota Belud, Kudat and Kota Marudu.

Sabah Electricity Sdn Bhsd (SESB) is on a round-the-clock watch to provide immediate assistance for power failures due to the bad weather.

“Our technical team is in place to act immediately to restore electricity in areas affected, ” he said in a statement Monday.

He said that critical areas like hospitals would be given immediate attention in the event of power failures due to damages.

“We advise the public not to touch the trees that has fallen electrical wires, ” he said in urging public to inform them immediately of any such incidences. 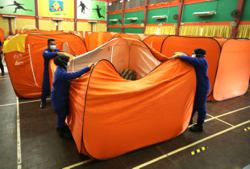