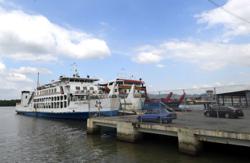 Green fingers: Ho showing the vegetables he learnt how to grow hydroponically during MCO.

PETALING JAYA: Boredom and wanting to have fruitful hobbies have driven Malaysians to have a blossoming interest in growing plants at their homes, especially vegetables, during the movement control order (MCO) period.

Data analyst Kenneth Ho started trying his hand in gardening, specifically in balcony hydroponics, towards the tail end of the MCO in May.

“I mainly started doing this out of boredom and needed something to fill my time by doing something useful.

“Initially I had no idea how to grow vegetables hydroponically, so I had to do a lot of research as to which vegetables would grow well given the conditions of high-rise living in Kuala Lumpur, ” he said.

“After research, putting what I learnt into practise was another challenge as I was trying to produce the ideal growing environment for each plant without resorting to expensive specialised equipment.”

His research and effort bore fruit, and the 24-year-old has been successfully growing spinach, mustard greens, red amaranth, kale and choy sum.

He observed that in general Malaysians were garnering interest in having homegrown vegetable produce and were also becoming more aware of the importance of food sustainability. Kok started a Facebook group with friends six years ago to nurture their gardening interest. It has now expanded to over 40,000 members.

“The most obvious benefit of growing your own produce is that you control what goes into it, so you can keep it herbicide and pesticide-free, ” he said, also joking that he gets “bragging rights” from growing his own food.

Zenith Kok, 37, created a Facebook group six years ago for him and his friends to share and nurture their gardening interest, which eventually grew to include other enthusiasts.

“I have noticed that since the MCO, many people have taken up gardening as it was one of the best ways to occupy our time and it gave us an excuse to go outdoors, which we were all craving.

“Though growing one’s own vegetables can seem time-consuming and tough, it is actually much easier than most people think, ” said Kok, who is from the automotive industry.

Meyven Khor, who hails from Perlis, said it was not unusual for people there to grow plants like lime trees, curry leaf plants and chilli plants in their home compounds.

She observed however that the gardening trend still has not quite picked up among Malaysians yet, even during the MCO, despite numerous articles that encouraged gardening.

“I think convenience comes first for most, ” said the lawyer, who started gardening last year.