The 65-year-old Bajau warlord from Tuaran has the backing of all 41 assemblymen under the Gabungan Rakyat Sabah (GRS), amid a shadow being cast by a Warisan Plus leader that the bloc was also still trying to get the numbers in the 73-member assembly.

Nearly 48 hours after Saturday’s election, GRS comprising of Barisan Nasional, Perikatan Nasional and Parti Bersatu Sabah (PBS) has overcome the impasse between Bersatu and Umno over the choice of chief minister.

The coalition agreed that Hajiji was sole choice after Sabah Umno’s Datuk Seri Bung Moktar Radin pulled back the party’s demand for the position following tense discussions after the election’s results were announced, which gave the coalition 38 seats to Warisan Plus’s 32.

The three Independents that won have given their support to GRS and Hajiji to become the chief minister.

Speculation is that they will go to Parti Bersatu Sabah secretary-general Datuk Jahid Jahim and Sabah STAR president Datuk Dr Jeffrey Kitingan, who is also the federal Tourism, Arts and Culture Deputy Minister.

However, it is still not clear if a state Chinese leader would be sworn in as a nominated assemblyman to be made a deputy chief minister representing the Chinese community as GRS does not have any elected Chinese assemblyman

Other Cabinet ministers have yet to be decided as the present focus was for Hajiji to be sworn in.

A swearing-in ceremony at Istana Negeri has been scheduled for 10.30am today based on an invitation from Istana Negeri that was circulated to the media by the State Information Department.

It is learned that at 5pm yesterday, the Istana invited Hajiji to attend the swearing-in ceremony.

Hajiji, the Sulaman assemblyman, had earlier indicated to reporters the swearing-in ceremony would be held on Tuesday (today).

At a press conference at about 1pm yesterday to announce that GRS had agreed on its sole candidate to be the chief minister, Hajiji said: “We have received the people’s mandate and we will carry out our responsibilities to serve them in accordance with our manifesto.”

He did not want to immediately indicate the members of his Cabinet but said that it would be done in due course.

Bung Moktar, who was also present at the press conference, said the decision to back Hajiji was based on the realisation and confidence that the new government was capable of restoring the people’s faith in leaders that care for the people.

“The new state government has a huge responsibility to shoulder but by working together, I believe, as soon as the swearing-in ceremony is over, the people will get the attention they deserve,” Bung Moktar said.

At the residence of Parti Warisan Sabah president Datuk Seri Mohd Shafie Apdal, there were also movements of political leaders and supporters going in and out though there was no clear indication whether he was making a serious bid for the chief minister’s post.

Shafie, who has not conceded defeat, is believed to have been in consultation with leaders in Peninsular Malaysia as well as locally but has not made any public statements.

He was considering forming a minority government in the event that GRS could not come up with a candidate for the chief minister’s post.

Warisan leader Datuk Ismail Bungsu has cast some doubts on GRS statement that it had a clear 41 seats to form the government.

Ismail, who is Sabah Cultural Board chairman, claimed that statutory declarations by assemblymen were being signed at Shafie’s Yayasan Sabah residence.

While not clearly stating any names of possible crossovers from GRS, Ismail told reporters that it was still confidential and claimed that GRS could make its own claims.

However, GRS leaders said all parties within the coalition and 41 assemblymen were intact and dismissed claims by the Warisan Plus leaders.

When contacted, Bung Moktar said there were no more surprises while Jeffrey said he preferred the swearing-in done immediately instead waiting until Tuesday (today).

A group calling itself Anak Muda staged a protest at several locations in the city to pressure the Yang di-Pertua Negeri to swear in the GRS leader who won the election. 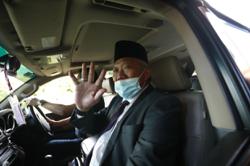