‘We should reopen border’

PONTIAN: The two land border crossings with Singapore should be reopened as soon as possible as the state government says it is not capable of finding employment for 100,000 Malaysians who may lose their jobs due to the prolonged closure.

Mentri Besar Datuk Hasni Mohammad said the current unemployment rate in the state was already at a record high of 18% with 35,000 people jobless.

“The time has come for the Federal Government to find a way to balance the people’s lives and their livelihoods as we do not want the scale to tip only towards lives due to the Covid-19 pandemic, ” he said.

Hasni said 5% to 10% of businesses in the city area had closed as a result of cash flow issues since the border closure in March.

He noted that the economy of Johor, which previously had some 250,000 people commuting daily between both countries to earn their keep, had been hard hit.

“Johor’s trade, among the highest in the country for five years since 2013, has also been badly affected.

“Some 100,000 Malaysians may lose their jobs if the closure is prolonged, ” he said. 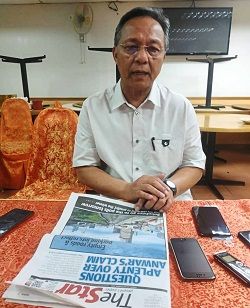 The human cost of restrictions: Hasni reading The Star’s report about the sufferings that the people are facing due to the closure of the border with Singapore.

Hasni said as the mentri besar, he was in touch with Prime Minister Tan Sri Muhyiddin Yassin to find a way to keep the Covid-19 situation under control while moving to fully reopen the border.

Hasni also said it was an opportune time for the border to be reopened for daily commute as Johor had been a green zone for some time.

“Let’s start with students and then gradually move to workers, ” he said when asked to comment on The Star’s front-page report on pleas from various quarters to reopen the border with Singapore to spur economic activities, especially in the city area.

Since border movements were curtailed in March, many businesses have been suffering, with some seeing up to a 70% decline without the patronage of Singaporeans.

Asked about the move by Singapore to slowly lift restrictions on Malaysians since Sept 1, which included reducing quarantine time to only seven days, Hasni said: “The Malaysian side should always reciprocate and coordinate the SOP with its Singaporean counterpart as I believe the health departments of both countries are constantly in touch.”

He pointed out that just as Johor’s economy was worsening, Singapore was also experiencing its worst-ever economic contraction in 55 years.

State Health and Environment Committee chairman R. Vidyananthan also felt it was time for the Malaysia-Singapore land border to reopen in stages.

“We feel that blanket SOP cannot be applied here; Johor and Singapore should follow a different criterion.

“The Johor government has given our suggestions on the SOP to the Federal Government and hope it will be taken into consideration and implemented soon for economic considerations.

“Besides, Johor has been a green zone for more than a month since the RGL (Reciprocal Green Lane) and PCA (Periodic Commuting Arrangement) started with Singapore, ” he said.

He added that more than 5,542 people had travelled using the two arrangements since Aug 17.