KUCHING: The Federal Constitution does not provide for a new prime minister to be appointed while there is a sitting prime minister, says Santubong MP Datuk Seri Wan Junaidi Tuanku Jaafar (pic).

The Gabungan Parti Sarawak (GPS) lawmaker said Article 43 of the Constitution was designed to give the sitting prime minister a certain amount of protection from being summarily removed by anyone in order to maintain government stability.

“Can you imagine, if any member of the Dewan Rakyat, who could come up with the numbers, be allowed to have an audience with the Yang di-Pertuan Agong to demand to be sworn in as the prime minister?

“And if such a thing were allowed under the Constitution, the Yang di-Pertuan Agong would be constitutionally bound to appoint a new prime minister from among the members of the Dewan Rakyat when a sitting prime minister is still there? Can you imagine the havoc it might cause to the country?” Wan Junaidi said when contacted yesterday.

The former Dewan Rakyat deputy speaker said Article 43 clearly states that if the prime minister lost the support of the majority, he has to resign unless he asks the King for the dissolution of Parliament.

Upon receiving such a request, he added, the King could either immediately dissolve Parliament for elections to be held or delay it for a grace period based on his wisdom.

“There is nothing under Article 43 or other provision of the Constitution to allow the Yang di-Pertuan Agong to remove the sitting prime minister based on extraneous force or reason, ” Wan Junaidi said.

On Wednesday, PKR president Datuk Seri Anwar Ibrahim claimed that he had secured a strong majority to form a new government.

However, he declined to reveal the numbers or names of the MPs supporting him pending an audience with the King.

Wan Junaidi also noted that there was no specific procedure for a vote of no confidence in the Dewan Rakyat.

However, he said the government’s failure to pass certain basic policies and laws, particularly the Budget, would be interpreted as a vote of no confidence in the prime minister and his government.

“So failure to pass the Budget is a process to tell the prime minister that he has lost the support of the majority of the members of the Dewan Rakyat.

“But it is not in any way to be interpreted as Parliament having the power to dismiss or remove the prime minister, ” he added. 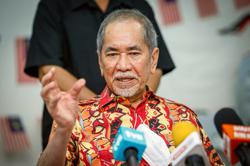