Shock announcement: Anwar, Wan Azizah and Saifuddin arriving for the press conference at a hotel in Kuala Lumpur. — Bernama

Declining to reveal details, the Port Dickson MP and PKR president said he would first like to have an audience with Yang di-Pertuan Agong Al-Sultan Abdullah Ri’ayatuddin Al-Mustafa Billah Shah.

“Conclusively, we have a strong, formidable majority. We are not talking (of a majority of four, five or six)... we are talking much more than that, ” he told a packed press conference at a hotel here yesterday.

Asked if he had two-third majority support, Anwar replied: “Close to.”

“With clear and indisputable support and the majority behind me, the government led by (Prime Minister) Tan Sri Muhyiddin Yassin has fallen, ” Anwar said as his supporters cheered.

He claimed to have the support of MPs from various parties, including Perikatan Nasional.

Asked whether Tun Dr Mahathir Mohamad would join in to provide support, Anwar said: “Not yet, he may decide later.”

He said his announcement was not an attempt “to form a backdoor government”.

“This government has the mandate and support. Those who decide to join will respect good governance, anti-corruption, rule of law (and be) inclusive of all races and religion.

“That is a very clear position that I am not prepared to compromise on. I am glad to say that those with me have decided and have strong endorsement (of the principles), ” he said, adding that traitors who left PKR “are not in the list”.

Anwar also said he was willing to consider a suitable role for Muhyiddin.

“I invite him to cooperate. I personally have no problems with him. I am ready to work with him if he can cooperate and facilitate a peaceful and orderly transition of power, ” he said.

Meanwhile, Dr Mahathir said he would “wait and see” what emerged from Anwar’s claim.

Addressing Nutanix’s Asean CIO Virtual Summit via Zoom yesterday, the former prime minister, said this was not the first time the PKR president had claimed to have the majority support in Parliament.

“We will have to wait and see if this is another episode of making claims that cannot be substantiated, ” he was quoted as saying by The Edge Singapore.

In 2008, Anwar similarly claimed he had enough support to take over the Federal Government following the political tsunami of the general election held that year. The coup did not happen. 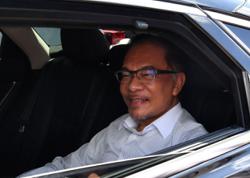