However, net investment income declined to RM13.46bil after the cost write-down on listed equities, which the EPF described as a prudent practice to ensure that its long-term investment portfolio remained healthy.

He cited ongoing issues, such as the US-China trade tensions and low oil prices that had remained unresolved, and Covid-19 continued to run havoc around the world.

“The EPF’s Strategic Asset Allocation framework, which guides us in how we structure our investments and portfolio, served us well during the tumultuous first half of the year.

“For example, our exposure in fixed income instruments enabled us to ride out the initial slump at the beginning of the quarter. We then saw an upward movement in equities towards the end of the quarter when both the FBM KLCI and global markets started to improve as economies gradually reopened.

“Moving forward, we remain cautious as a second Covid-19 wave remains a possibility which will have a major negative multiplier impact on the already weak economic conditions, ” he said.

As at the end of June, EPF’s investment assets stood at RM929.64bil, of which 30% was invested overseas.

As of the second quarter, 39% of the total gross investment income recorded was contributed by EPF’s overseas investments.

The overseas income was driven by recovery across global equity markets in the second quarter, which allowed EPF to ride out the slump during the first quarter.

Fixed income also contributed higher gains due to the low yield environment, which provided more opportunity for the fund to realise its gains.

“In light of the unprecedented situation, we believe that we have managed to deliver a satisfactory performance, balancing the pressing liquidity needs of our members against the long-term responsibility of ensuring financial adequacy at retirement and sustainable returns on investment, ” said Tunku Alizakri. 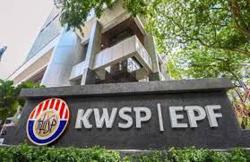