BUTTERWORTH (Bernama): Another woman has died of suspected carbon monoxide poisoning - bringing the death toll to three - after four friends, all aged 21, fell asleep in their car at the parking lot of a petrol station in Sama Gagah here Wednesday (Sept 16).

Two other women, Sharifah Fariesha Syed Fathi and Ayuni Shazwanie Shabri, died in the Wednesday incident while Nor Adilah and her twin Nor Aqilah were taken to hospital in critical condition.

"The twins were transferred to the two hospitals because these hospitals have machines to treat carbon monoxide poisoning victims. However, we were informed that Nor Adilah died this evening, ” Shafee said Thursday.

He said that Nor Aqilah, who is undergoing treatment in the ICU of Hospital Angkatan Tentera Tuanku Mizan Zainal Abidin, is being closely monitored by the medical team.

Initial investigations showed that the four women had gone to Pulau Jerejak, near here, for the Malaysia Day holiday Wednesday, and it was understood that they were on their way home to Sungai Petani and Gurun in Kedah when they decided to take a break but are believed to have instead fallen asleep.

Meanwhile, Shafee said checks carried out by a technician on the car used by the four women found that there could have been a leakage in the vehicle's exhaust.

"This is because during the inspection by the technician, the exhaust produced a very loud noise and emitted smoke. Due to the leak, smoke entered the car and the four suffered from carbon monoxide poisoning, ” he said. - Bernama 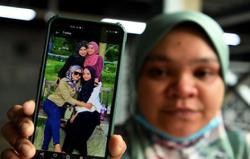